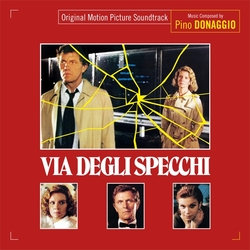 The music for Via Degli Specchi follows in the footsteps of the composer's acclaimed, erotically-charged De Palma thriller scores such as Carrie, Dressed to Kill and Blow Out. In this score, Donaggio follows a ''less is more'' approach with a piano-harp duet focusing on the growing bond between the investigator and the witness. As two female characters clash with tragin results, Donaggio accentuates the relationship with some intimate and carefully crafted themes. The CD also includes two original songs from the picture.

Supervised and mastered by Claudio Fuiano, this present edition features the original album program which was slated to be released on LP, plus a host of bonus tracks. 8-page liner notes by Gergely Hubai discuss the film and the score and also includes original comments by Pino Donaggio.