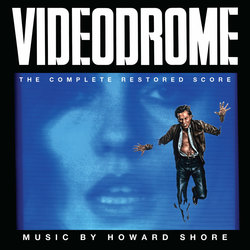 Another creative triumph in his long-running collaboration with writer/director David Cronenberg, composer Shore's riveting work for Videodrome is a thrilling and experimental blend of synth and strings that expertly explores and weaves the film's complex tapestry of psychological drama, eroticism, science fiction and politics together in haunting and seductive fashion. Produced by Howard Shore and Alan Frey and mastered by Simon Gibson at Abbey Road Studios, this limited CD release of 2000 units presents the restored film score and features exclusive, in-depth liner notes by writer Jeff Bond, (featuring comments from the composer), and art direction by Dan Goldwasser.