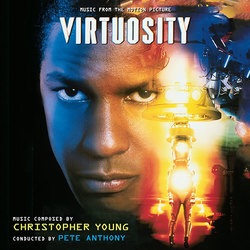 Intrada announces the premiere release of Christopher Young's electrifying score to the 1995 Paramount Pictures Denzel Washington action-thriller, Virtuosity. The score moves between two worlds – hard-hitting techno electronica that pumps up the brutal virtual computer world of the movie's universe and pulse-pounding orchestral action music for the film's final reels as reality and virtual reality collide. The dazzling array emanating from a cyberpunk ocean of synthetic textures, techo beats and electric riffs is unique to both composer and film, adding musical atmosphere to the relentless and simply evil AI SID. The line between electronic and orchestral worlds does not coincide with SID's emergence from virtual world to physical reality, but seques during the film's final third, when SID takes a child hostage and launches Death TV, unleashing ferocious orchestral fireworks as protagonist Parker Barnes hunts down and overcomes SID.

Young composed more than 50 minutes of electronic music for the first half of the film and a further 23 minutes of orchestral music, recorded at Paramount Scoring State M in the summer of 1995. With heavy editing in the film, some tracks on this new album are being heard for the first time, and Intrada presents it all in this 76-minute program that is a thrilling ride from start to finish.