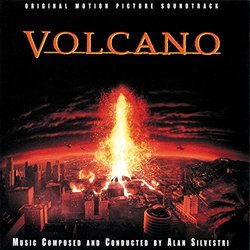 Some of Alan Silvestri's best work has been for action films such as Judge Dredd and Eraser, not to mention the Back to the Future trilogy. He has also worked on his share of films for which his score ends up outshining the film, but is nevertheless missed. 1997's Volcano is one such example.

The score consists of two types of music. The album begins with some slow underscore, but Silvestri's powerful writing fully comes to bear in three cues toward the end: "Teamwork", "Build A Wall", and "March of the Lava". Here, Silvestri pulls out all the stops and unleashes the brass section in a powerful performance of his militaristic theme for the film. The first of these two cues build the brass nicely with brief statements of the theme. "March of the Lava" is easily worth the price of the CD. Backed by racing low strings and clanking percussion, Silvestri gives the molten lava its own voice in the film. Halfway through this cue, the trumpet staccatos cue the snare drums and introduces the theme in its one full statement. The theme resurfaces briefly one last time in "Roark is Missing". It is too bad the film wasn't as good as the score, but this (short) album will serve as a nice reminder of Silvestri's abilities.