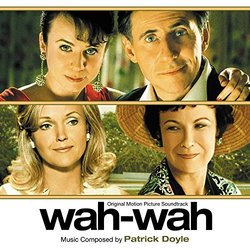 While I sat down to write the review to Patrick Doyle\'s score to Wah-Wah, a scene from one of my favorite movies, Heights, came to mind. At her birthday party, a stage actress played by Glenn Close quotes a line from Shakespeare to her best friend, who mistakenly identifies it as coming from Henry V.

"Henry VI," she corrects him.
"Nobody reads Henry VI," he says, chuckling.

Her answer? "Well, Shakespeare\'s worst is still better than anyone else\'s best."

It seems like an appropriate beginning to a review of a Patrick Doyle score: the man has, after all, written music for Twelfth Night, Henry V, Much Ado About Nothing, Hamlet, Love\'s Labour\'s Lost, and As You Like It, all based on Shakespeare\'s plays. He is the Shakespeare composer; as such, perhaps, and in retrospect, Wah-Wah is a minor entry into the Patrick Doyle canon. It is well written and a league or two above what most composers could have done with the material. It could be the worst of Doyle although, not being entirely familiar with his body of work, I cannot say for sure. But it is definitely far from being bad and is still better than most people\'s best.

The story firmly sets the tone of the score: it is a coming of age tale set against the backdrop of the African nation of Swaziland\'s independence from Great Britain in the late 1960s. As such, the music is tainted with a strong flavor of bittersweet regret. Every cue seems to signal the imminent end of something once taken for granted and the beginning of something at once pride inspiring and scary. The album begins with "Swaziland", an unsure cue driven by an alternating two-note ostinato on the piano and made all the more troublesome by the tragic yet restrained chords for strings and woodwinds. By the end of the album, this quiet uncertainty has turned into proud resolution with classically-inspired harmonies for the strings, a trademark of Doyle\'s music, such as those heard in "Please Forgive Me" which accompany the main theme. If sepia tone was an orchestral color, Wah-Wah would be bathed in it. The cues in between the opening and closing moments reiterate the piano ostinato, introduce tender melodies for the oboe and clarinet, and hint at the political and personal closure that awaits the characters. The album sidesteps this characterization only twice with "Goodbye Swaziland", which shifts at the halfway mark into a recording of a traditional African song, and with "Ngatsi Ngisahamba", a more classically-inclined choral piece sung, interestingly enough, by the same choir heard in "Goodbye Swaziland".

Wah-Wah is definitely an English score, but without bravura or pomp. It is sad, almost elegiac, and beautifully composed, as in \'written\' but also \'restrained\'. All the colors of the orchestra are used, except for the percussion, but the strings definitely carve out for themselves a bigger and bigger piece of the cake as the score progresses. The album ends quietly on Doyle\'s solo piano performance of the main thematic material of the score, which reminded me of Chris Young\'s "Unfinished Lives" from his score to An Unfinished Life but on a much smaller scale. Wah-Wah is a rainy day score: it won\'t cheer you up but might make you see the beauty in the falling raindrops. It is minor Doyle, perhaps, but solidly crafted and something to give other composers a run for their money.