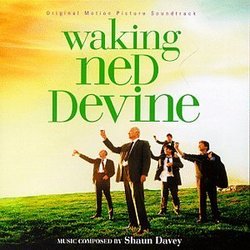 There are few films, that upon missing several possible showtimes, I personally will make repeated attempts to re-see, Waking Ned Devine is definitely one of them. Upon graciously receiving this soundtrack in the mail from London Records, I put it in for an initial listen. I’m always a fan of Irish music, in fact I was listening to it long before it was considered vogue (yes, this coming from a guy who wore argyle socks in Elementary school). Listening to it repeatedly, mainly through the fact that it’s a good album on its own, complete with a catchy tune by The Waterboys and, in my own opinion, a mistakenly overlooked tune, "The Ballad Of Ned Devine", which pretty much lays out the entire movie in a short few minutes. So, with this inspiration, I had the impetus to attempt to find a theater playing it in the Washington metro area (a tougher task than you think).

Squeezing into my aisle seat (ala Roger Ebert), I settled in to watch the mediocredly hyped film, which is it’s only downfall. However, due to great word of mouth, the theater was packed, complete with yakkers, seat kickers and the ever-present crying baby (the only thing missing was the cell phone user). If the film was released by Universal or Buena Vista, the title sequence would have been even funnier than what it ended up as. The music flowed along mostly traditional lines, utilizing a small ensemble as well as for larger pieces, a full orchestra and small chorus. Overall, finely orchestrated and extremely well played, weaving spritely jigs, reels and ballads with buoyant lifting choral-like passages. This is truly an amazing re-debut (his first wide release was for Twelfth Night in 1996) for composer Shaun Davey, and I hope that with the wave of Irish-tinged films making their way to the "mainland" we see more scores penned by this talented musician.

;Most of the CD follows the film sequentially with a few liberal edits that didn’t end up in the final film. There are some voice-overs that, unlike many of the recent soundtrack releases, actually meld well with cues, and add to the emotional meaning of the pieces. There are two cues that I noticed that were in the film and aren’t contained on the soundtrack CD, but their length probably precluded their inclusion. One of the most outstanding tracks, mentioned above, is "The Ballad Of Ned Devine / The Witches Reel" combination vocal/instrumental. If there was ever a song that could sum up everything about a movie, its plot, its characters, and its emotions, you could never find a better song. It is both uplifting and sorrowful, highlighting the joy of being a winner but unfortunate circumstances of not being able to enjoy it. It a stand out song on it’s own, but is even more poignant after a viewing of the film.

One intriguing point to notice in the film was the possible cameo by Seamus Egan, composer for the film The Brothers McMullen and award winning Irish-American musician, playing the whistle (during the funeral) and bodhran (at the end). However, on the released score, talented musicians John McSherry and Laim O’Maonlai carry their own on those instruments.

All around this release is a keeper, one enough to get me off my duff to actually see the film during it’s initial run as well as write a review for it, so don’t let your life pass you by, take a listen and see the film for yourself, you’ll thank me for it.