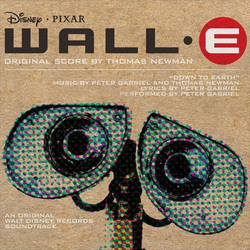 When I requested to review Wall-E I don\'t think I had seen the film yet, either way, I was granted the ability to review it, and I must say, even though the film is uplifting and depressing at certain points, it\'s a good film, a great film—if you are into that sort of thing. As for the score, I think Thomas Newman did a wonderful job of it, just by the music I can tell what scene is what and where it is in the movie, but I also think that, that is because the whole score is a suite in and of itself. It tells the story, but also helps tell the story. It is a significant addition to the film and helps keep it strong.

With the first original piece of score from Newman entitled, \"2815 A.D.\" not only do we get a sense of loneliness, but also the hustle and bustle of what Wall-E is doing to some extent. But it doesn\'t end there, it continues to go on much further and encapsulated the entire film.

The only disagreement I have with the album is the inclusion of the pieces written by Michael Crawford. The score can support itself, it doesn\'t need Mr. Crawford\'s contributions to the album, in fact I feel they throw it off balance. One actual song that I do think merits more conversation is Peter Gabriel\'s, \"Down to Earth\". It\'s a charming addition to the album that I enjoy as often as possible.

Something a little more Disney-esque of the album is the inclusion of sound effects from the movie, almost as a set of cue notes for the younger listeners. But with these \"cue notes\" they aren\'t distractions, they actually go well with the score. And other than pointing out \"2815 A.D.\" as a crucial piece to hear, it\'s really just to get you use to the idea of this being more of a collective, verses pieced together.

All in all Wall-E is a good album, Newman did an excellent job conveying exactly what he needed, and made the film a winner on many levels, even with me, and I almost detest watching G rated films with a bunch of children sitting around me. If you enjoyed the film and want to enjoy reliving some of its scenes in your head, buy the album, Newman did an awesome job, but if you are kind of like me, just give it a quick glance over and know you probably would rather spend the money on seeing other flicks instead of buying just one album.