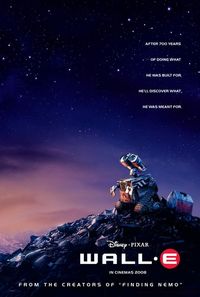 It seems like Pixar Animation Studios can do no wrong. Even their weakest film, Cars was above and beyond most of the stuff being released by Hollywood today. Their latest film, WALL-E is no exception. Taking place in the future, Earth is now run by the Big-N-Large Corportion. Commercialism is at the apex of being. But, pollution and garbage are threatening the ability to live on the planet. So, the corporation decides to pack all the humans into spaceships, and leave for a 5-year "space cruise", while robots clean up the mess. 700-years later, they\'re still in space, and only one robot is still working on Earth: WALL-E. WALL-E has developed a bit of a personality over the past seven centuries, and is exceptionally curious about the knickknacks he finds while cleaning out the piles of junk. One of the items is an old VHS tape of Hello, Dolly which WALL-E watches over-and-over, and learns from. Not only does he learn about dancing, but he also learns about emotion - which is expressed by holding hands.

When a spacecraft arrives and drops off EVE, a sleek magnetically powered robot, WALL-E is smitten - and tries to connect with her. She slowly warms up to his advances, and just when things seem like they\'re going well, her mission directive kicks in when she finds a small plant that WALL-E had found. Seemingly shut-down, WALL-E still tries to carry on a relationship with EVE, but things seem hopeless. Just when he gives up, and tries to return to his old routine, the ship arrives to take EVE back - but WALL-E manages to hitch a ride on the ship, which takes him back to the Axiom - one of the human ships that were waiting out in space all this time. And now WALL-E\'s adventure truly begins, as he encounters all manner of robots and humans on the ship, and his purpose starts to take shape, and his actions might affect the very course of mankind.

Directed by Andrew Stanton, WALL-E is about 85% pantomime. WALL-E doesn\'t really speak - so for the first half of the film, everything is conveyed and communicated visually. It\'s an animators dream, and one that the geniuses at Pixar do so very well. Where the film starts to lose a bit of ground is with the humans, who - after 700 years in Zero Gravity - have supposedly lost all their bone structure and have atrophied muscles. There are only three human characters that are followed - the captain (voiced by Jeff Garlin), John (John Ratzenberger) and Mary (Kathy Najimy). At no point do we care about the latter two; they\'re just in a few random scenes to point at things. The captain has a tad bit more of an emotional arc, as he learns all about Earth and even goes against the mutinous autopilot (voiced by... Macintalk. Yes, really). But it seems as though all of the emotional story work went into the robots, which are admittedly more interesting. Sigourney Weaver even voices the ship\'s computer, but doesn\'t get to do much beyond stating commands and status lines (ironically, like her character in Galaxy Quest). Fred Willard plays a live-action role as the Big-N-Large CEO, which was weird to see in a Pixar movie. It was like that ending to Happy Feet where suddenly all these live-action humans showed up. Slightly off putting. And the ending of the film - without giving it away - is a bit of a head-scratcher, at least for the humans and what it means for the future of humanity. But that aside, it\'s still a movie with heart, and the fact that those Pixar geniuses make you feel emotion for a computer animated robot, give them the Oscar. (You know it\'s coming anyways!) That WALL-E looks like "Johnny-Five" from Short Circuit and E.T. is merely coincidence, but there are physical characteristics to his design that made feel immediately attuned and comfortable with him. Just part of the Pixar mastery, I guess.

The look of the film is different than other Pixar films - they did a great job recreating the look that the old 70mm Panavision cameras gave, with chromatic aberration, lens distortion, etc. It\'s a very realistic feeling that sucks you right into the film. Ben Burtt did the sound design, and also came up with all of the sounds for the robots - including voicing WALL-E and a few other bots. It\'s a phenomenal job, and he should stick to sound effects work instead of editing film. Adding to the mood of the film is Thomas Newman\'s score, which has the typical quirkiness of some of his other scores, but also a very large sci-fi score with Lydian motifs, and plenty of action. The Hello, Dolly songs play an important role, as well as a new song that Newman co-wrote with Peter Gabriel, "Down to Earth", which Gabriel performs on the end credits.

There\'s an environmental message in the film, but at times it seems like an afterthought even though it\'s also implied that it\'s part of the main plot, aside from the WALL-E/EVE relationship. As much as I enjoyed the film when I saw it, the more I thought about it afterwards, the more questions started popping up. I\'ll still happily recommend WALL-E; it\'s a masterpiece of animation and anthropomorphism, but I don\'t know how well it would hold up on a second viewing.