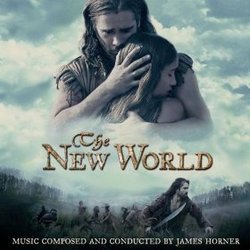 Based on the story of Pocahontas, Terence Malick's The New World is a stylish film (much like his The Thin Red Line), which serves more as a tone-poem experience than a filmed narrative. Some might consider this a "spoiler," but it's all based on the historical record: at the beginning of the film, John Smith (Colin Farrell) arrives to help found the Jamestown Colony. He is sent up river to get help from the natives, and ends up meeting and falling in love with the princess Pocahontas (Q'Orianka Kilcher). But the natives don't want the "invaders" to stay, and so after a few months, they decided to try to fight them—and it doesn't quite work. Smith later decides that he can't commit to Pocahontas, and so he leaves—and arranges to have Pocahontas told that he died on the crossing back to England.

Heartbroken, Pocahontas mourns, but slowly assimilates into the new colony life, until John Rolfe (Christian Bale) arrives. He falls in love with her (but she's not quite feeling the same way)—so they marry, have a kid, and a few years later, go to England. There she encounters Smith again, decides that she no longer loves him, and happily moves on with Rolfe. However, she falls ill and dies before going back to the Americas.

That's pretty much the whole film, spread out over a very slow, uneven 150 minutes. It's a very beautifully shot film, with almost every scene worthy of capturing in a frame and hanging on a wall. Composer James Horner wrote about four hours of score, with much of it replaced in the film with the prelude to Wagner's "Das Rheingold," and the slow movement of Mozart's Piano Concerto No. 23. What does remain of Horner's music works quite well, providing an emotional backbone to the character of Pocahontas.

The soundtrack album contains a lot of music not used in the final film, and it's certainly not because of the quality. Beginning with "The New World," Horner manipulated bird songs amidst a soft twinkling piano, lush strings, and chorus. Once the full orchestra comes in, we're treated to a sweeping rendition of the New World Theme, which ends with a brass theme for the new arrivals, which continues in "First Landing." The beginnings of the Love Theme is first heard in "A Flame Within," which is orchestrated in such a way that I'd dare suggest it's a close sonic cousin to the orchestrations Horner used in Titanic.

The Love Theme is heard in its entirety in a few tracks ("Pocahontas and Smith", "Forbidden Corn", and more), and will arguably be the largest point of contention for listeners of the album. Fans will talk about it on the merits, and the effectiveness of it as a love theme, and critics will deride it for its striking similarity to much of Horner's themes over the past decade. Personally, I ride the middle ground here—it's a strong love theme that works very well in the film (especially by the time you get to the end of the long journey), but I can recognize that Horner has a certain compositional style, and I've come to expect that from his work. Ultimately, if it works in the film, that's what matters—and it's still a gorgeous piece of music!

With the three themes established, Horner's score slowly unfolds over the course of the album. Like the visuals, many of the cues are slow and take their time, making this a very soothing album to listen to. There is only one fight sequence in the film, and on the album "Winter—Battle" covers it, with some pounding percussion, and soft ethereal choir. With the exception of the use of bird calls (also heard again in "Of the Forest"), there is nothing groundbreaking about this score.

The album makes for a very enjoyable listen, and the love theme grows over the score to the point where the inevitable pop song (with lyrics by Glen Ballard) makes an appearance. While the song, "Listen to the Wind," does not appear in the film at all (thus rendering it ineligible for Oscar consideration), it is sung nicely by Haley Westenra, and makes a nice companion piece to that other famous Pocahontas song, "The Colors of the Wind" from the Disney animated film, Pocahontas.

The New World is not a film for everyone, and the soundtrack is probably the same way. A solid effort by James Horner, I always feel bad for the composer when they do so much writing, only to have it sidelined for source music. But, this is a Terence Malick film, and if Hans Zimmer's experience on The Thin Red Line is any indication, Horner could have guessed what he was getting into. Still, it's satisfying enough to have an album release that is filled with enjoyable romantic music, even if much of it is absent from the film for which it was written.