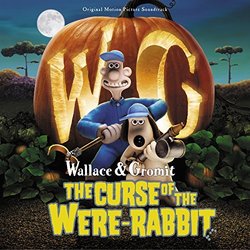 Wallace & Gromit: The Curse of the Were-Rabbit

Review: Wallace & Gromit: The Curse of the Were-rabbit

Over the past ten years, few characters have charmed me as much as Wallace and his dog Gromit. I first encountered them after my older brother recorded their adventures off TV and proclaimed one Christmas that I simply had to sit down and watch them. I was instantly enchanted. It amazed me that these bits of clay had more life than many of the movie stars that regularly earned over 10 million a film. Their creator, Nick Park, managed to imbue them with such humor and warmth that I longed for further adventures.

That wish was finally granted this year with the release of Wallace and Gromit: The Curse of the Were-rabbit. Fortunately, Nick Park brought along almost the entire crew from the short animated films that started it all, including composer Julian Nott. Unless you are an unrepentant fan of Wallace and Gromit, you have probably never heard of Nott, but after this movie his profile should increase dramatically. Nott attended the National Film and Television School in the UK in the mid-1980s where he first met Park. He scored all three Wallace and Gromit shorts, "A Grand Day Out," "The Wrong Trousers," and "A Close Shave," but to date has done only limited feature film scoring.

Fans have more reason to rejoice than just Nott\'s presence in the crew – the venerable and jaunty theme song from the shorts has made the leap to the big screen in a big way. As you might expect, it opens the movie with the aptly titled cue "A Grand Day Out," but goes on to hold the entire score together. In using it this way, Nott takes the theme through its paces, my favorite being "Bless You, Anti-Pesto." In this cue, the theme is recast as that most British of institutions, the brass band. Nott has basically created his own version of an Edward Elgar Pomp and Circumstance. It is a delightfully witty moment.

Although the theme appears throughout the score, a second, more sinister theme, answers the first one in "A Grand Day Out." This second theme is almost an homage to Danny Elfman, the composer of the fall\'s other great claymation film, Corpse Bride, and is directly related to the dreaded Were-Rabbit. The theme opens hauntingly on the celesta before breaking into a brass fanfare and finally resolving to stand on the Theremin. It is a sound that could have easily have appeared in Nightmare Before Christmas or Batman Returns.

The orchestration is really what makes this effort stand out. A host of additional composers worked on the score (which was produced by Hans Zimmer), but the sound is so close to that created by Nott for the original shorts that due credit must go to his vision. We get the aforementioned brass bands and Theremin, but also organ and chorus to flesh out the Were-Rabbit\'s theme in "Arson Around," the almost texturist effects at the end of "Ravaged in the Night," and even the harpsichord in "Fluffy Lover Boy." Part of the score\'s fun is in trying to figure out where Nott will go next with his orchestration. But this is not novelty for novelty\'s sake; the interesting sounds are always in service of the film.

This year has been a banner year for traditional animation and its scores. While computer animated movies have so far fallen flat, claymation films have been the cream of the crop. Corpse Bride and now Wallace and Gromit have proven that flashy animation styles cannot take the place of good stories and characters, the essential elements for not only a good movie, but a great score as well. Danny Elfman and Julian Nott have likewise proven that simplistic scoring is not necessary for material often viewed as "kid\'s fare." These two scores have been two of the most consistently inventive and downright fun of the year.