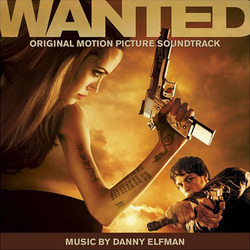 The shoot \'em up bang-bang movie that is on everyone\'s lips hit theaters in wide release on June 19, 2008. The score by Danny Elfman shot to the music store shelves June 24, 2008, the question for soundtrack.net readers is, is it any good?

Much of my experience with Elfman\'s scores are campy, funny, yet serious scores. Elfman has the ability to create thematic material that is rememberable. Material that you can hum as you walk the streets, but is there any such material in Wanted? Sure, it\'s somewhere in the amped up score.

But the speaking of themes, and motifs and all that musical hogwash isn\'t really needed. The movie itself is an action flick, constantly moving forward at break-neck speeds, and this can only really mean one thing of a good score, it too will get your blood pumping. In short, Wanted is a total buy. And I say this whole heartedly, it really is a good album, and one I plan to listen to a good bit.

Elfman knows what he\'s doing, I will not begrudge him that. He comes from the classical school of movie composers which can be heard instantly with \"Success Montage\" which contains a wonderful melodic cello part that I totally dig that moves to the bassoons and then the upper strings and so on and so forth, a wonderful melody and then it breaks into a rhythmic section that really gets you moving. I think \"Success Montage\" is one of the stand out tracks on the album. And even though it stands so firmly on it\'s own it blends wonderfully with the film and it hardly noticed.

Another track that makes the album worth every penny is \"Revenge\", and the track much like the scene in the movie makes it worth your money. The film make by a turn-your-brain-off and just have fun flick, but the album, much like much of Elfman\'s music is deeper than it first seems, so buy the album and have a listen, and another listen, it\'s worth it I promise.

Buy the album, by the DVD when it hits shelves, but this is a must for the soundtrack collector, it really is beautiful in all its boldness and it just rocks.