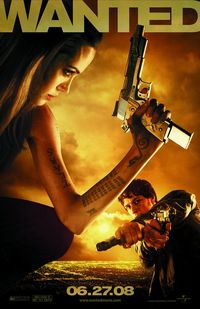 Directed by Timur Bekmambetov (the guy who brought us the visually slick and stylish Russian Vampire films Nightwatch and Daywatch), Wanted is an adult action movie loosely based on the comic book miniseries by Mark Millar. Wesley (James McAvoy) is bored with his life; he works a mindless job in a Chicago office building, his boss annoys him, his best friend is schtupping his girlfriend, and he just doesn\'t care about any of it. So when the sensuous and sultry Fox (Angelina Jolie) shows up and tells him that his father (who left his mother when he was born) was the world\'s greatest assassin, and the man who killed him is now after Wesley, his world is turned upside down. After escaping from the rogue assassin Cross (Thomas Kretschmann), Wesley meets the members of The Fraternity, a secret society of assassins led by Sloan (Morgan Freeman). Informed that he has the skill to be a world-class assassin, and has to choose which life to lead, Wesley eventually decides to do something with his life, and join the order of killers, so he can train to be good enough to take down Cross and avenge his father\'s death.

Wanted is a graphically violent movie that doesn\'t hold back. It borders on absurdity for most of the film (and occasionally dips over the line), but it\'s certainly a lot of fun throughout. The unassuming McAvoy is not your typical \"hero\", and after he \'graduates\' from his training, the assassination sequences are flashy and energetic, if not just a bit inspired by The Matrix with the super-slow-motion segments, and fancy gunplay. There are a few twists and turns in the storyline, but I will just point out that the climax of the film was at times so ludicrous that I couldn\'t help but enjoy it\'s inventiveness and gusto.

Wanted isn\'t the type of movie you would go see for deeply fleshed out characters, but there is a bit of a shift in Wesley overall arc, as his destiny unfolds. Themes of \"fate\" are explored, and it gives the film a little more depth beyond being some mindless shooter with flashy sequences. It\'s fun to see Morgan Freeman take on a role a little different than the one he usually seems to play (dropping the F-bomb is not in his usual repertoire), and the narration lends a Fight Club element to the overall production. The musical score by Danny Elfman has a few themes that grew on me and the energy and playfulness of the music (as well as the song he wrote for the film) translate into a delightfully enjoyable soundtrack album.

Wanted is not for kids; it\'s as violent as you would expect any gun-raging assassination film to be. But if you\'re in the mood for something a little different, Wanted is an adult-targeted R-rated popcorn movie worth checking out.