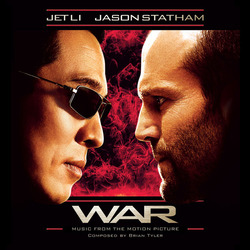 Brian Tyler's scores in 2007 have run the range of genres: a return to horror with Bug, the drama Partition, and now an action film, War. Over the past ten years, and with the most renown in the past five, Tyler has gained experience with all three: Terror Tract and Darkness Falls in horror, The Greatest Game Ever Played in drama, The Hunted and Timeline in action. Tyler has been very good at mixing genres, however. The horror/drama film Frailty combines elements for a score that is both chilling and suspenseful; the epic Children of Dune incorporates both the power of an action score and ethnic instrumentation that provides a background for much of the tension of the miniseries. And few of his scores, including those listed above, adhere strictly to genre expectations. War, however, does.

For an action score, War is definitely of a certain style. It does not have the full orchestrations and brass fanfares of Timeline, Annapolis, and Children of Dune; instead, it follows more closely in the vein of The Hunted and Paparazzi. Electronic and rhythmic, it has the feel of components of Harry Gregson-Williams' Spy Game. The second track, "War Opening Titles" begins this way, with electronic percussion, then moves into a fast, string rhythm (the orchestral elements were performed by the London Symphony Orchestra). The majority of the score's orchestrations are these elements: electronics, percussion, and strings. The next track, "Confession," slows down into a melodic moving line, with percussion only behind it; this track stands out from the rest because of the melodic feel. "Bangkok Downtown" has a cool Asian sound to it, also with the electronic percussion behind it. The fast string line returns in "This Isn't Japan" but generally the score functions more on a rhythmic level than thematic. The second to last track (the last is a remix of the opening titles) is a rock song called "Suicide King" by Machines of Loving Grace: it fits the style of the score, and is the kind of song you would expect at the end of an action film, in the background as you're leaving the theater (and I don't mean that as an insult, that's just what it is).

As an album, this score makes for good background music for a certain, energetic atmosphere, but for the most part lacks the musical nuance typical of Tyler's compositions.  However, looking back at Tyler's track record, I don't want to criticize him for these stylistic choices: he wrote an appropriate score for the movie. It's a fight scene/chase scene action film, and the energy and pacing such a film requires behind it is exactly what this score provides.

Editor's note: For those who enjoy Brian Tyler's score on the album and want more of it, Lionsgate Records has provided his complete score to War online as an iTunes exclusive.