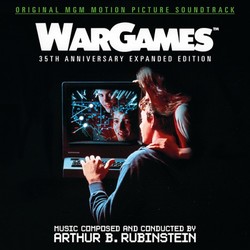 Quartet Records and MGM present the 35th-anniversary remastered, 2-CD expanded edition of the score by Arthur B. Rubinstein for the classic '80s thriller WarGames.

Directed by John Badham in 1983 and starring Matthew Broderick, Ally Shedy, Dabney Colleman and John Wood, this mega-hit film is about a young man who finds a back door into a military central computer in which reality is confused with game-playing, possibly starting World War III.

Arthur B. Rubinstein, Badham's usual composer, provides a dynamic action score with incredible sweep and colorful excitement. With no single main theme, his score for WarGames is a veritable feast of themes and motifs, many of them cleverly interrelated.

Unfairly, Arthur B. Rubinstein was not a popular composer in 1983, but the film's incredible success inspired Polydor to release an LP of WarGames that, typically for soundtracks of the era, featured a selection of score highlights and songs intercut with dialogue excerpts and sound effects from the film—far from being the full score. In 2008, Intrada Records released a magnificent CD produced under the supervision of Maestro Rubinstein himself, newly remixed from the 2 24-track session masters. This high-quality CD was quickly sold out and fetched high prices on the second-hand market, but the sound was a bit different from what was heard in the film, possibly due to the composer's personal choices when revisiting the score 25 years later. With the 35th anniversary of the film, we decided not to offer a straight reissue of the Intrada CD, but to return to the original mixes of the film, made at the legendary MGM Scoring Stage in Culver City.

The first CD is sequenced in film order and sounds as it is heard in the film. On the second disc we have included, for the first time, the reissue of the original Polydor LP, whose mixes were also a bit different from what was prepared for the film. We have also included in the bonus section some alternates and cues not used in the film, offering the most complete edition that will be a delight for fans of this film and score. Produced, restored, remixed and mastered by Chris Malone in painstaking detail from ˝″ three-tracks, ˝″ stereo-tracks and album masters (we even pulled the stereo music stem for a 15-second cue missing from the session tapes), all vaulted in pristine condition at MGM. John Takis provides detailed liner notes in a 20-page full-color booklet.

This album is dedicated to the memory of Arthur B. Rubinstein, who passed away in April 2018.