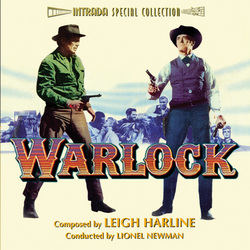 After recent special edition releases of Silverado and Tombstone, Intrada continues its focus on Western scores by featuring Leigh Harline\'s Warlock from 1959, which is then paired with Hugo Friedhofer\'s music from Violent Saturday, a melodrama set in the 1950\'s and centered around a proposed bank robbery. Both films are ensemble pieces full of moral ambiguities, complex characters and dark subject matter, all qualities which each composer had handled successfully on numerous occasions.

This very limited album release opens with Warlock and its powerful "Main Title". Strong brass chords, timpani and pained string textures dominate the cue, the tone moving to lower registers as it pounds out its finish. Furious strings open "McQuown\'s Game", soon accompanied by tough low trombones and angry muted trumpets. The tone shifts to the sweeping, optimistic theme in "Marshall Blaisdell", essaying his character as a well-renowned gunfighter who is warmly welcomed in the town of Warlock, bringing law and order with him. Contemplative mid-range strings and woodwinds run throughout "The Past Returns" and "First Meeting", though Clay Blaisdell\'s warm theme makes brief appearances in both and the latter track does move into more major key textures.

"Dinner Invitation" features a pleasant, sentimental setting for strings, flutes and clarinets, with a touch of bucolic flavor. Turbulent, pained strings surprisingly open "Romance" before a saddened solo oboe sketches out Blaisdell\'s theme and the mood alternates between sweetened strings and ominous, darker intrusions of timpani, low woodwinds and horns. The lengthiest cue of the score is "First Challenge", where striking string stings contrast the darker hued insistence of low end piano and timpani, in a recurring descending motif. A short interlude for two part woodwinds set against horns in open harmonies eventually leads back into rising danger, low tones and timpani. "Johnny\'s Challenge" continues in this vein, adding sinister muted brass, then into an unsure rendition of Blaisdell\'s theme moving from oboe, strings and solo horn. Driven by steady, persistent timpani, the tension rises and climaxes and in "Johnny\'s Victory" is released by a return to warm, Americana writing. The heavy textures lurch back on the scene in "Clay\'s Sorrow" yet through Blaisdell\'s theme on clarinet the cue moves through plaintive territory and is capped by a brief sweetened swell from the strings. Brooding and worried material dominates "Jessie and Clay" and in "Clay\'s Departure / End Title" shifts towards the earlier optimism as sweeping statements of Blaisdell\'s theme brings the score to a resounding finish.

A dark, moody "Prologue" draws the listener into Friedhofer\'s Violent Saturday, which then progresses into bold, dramatic brass exclamations and high range, pained strings for the "Main Title". The tone takes a hard right for "If I\'m Lucky", careening into a smooth jazz number for drums, bass, trumpet, saxes and accordion. Punchy brass kick open "Harper", followed by questioning woodwinds and muted horns. This latter tone opens "Dill and Library" where we get more of sense of the curt main theme in the strings, a desperate by defeated line in 4-note groups. This track then evolves back to jazz as the theme is essayed in sleazy saxes and muted horns. The strings are allowed a bit of restrained sweetness in "Emily", but this short interlude is interrupted by "Harper Takes A Walk" with its oppressive low strings balanced by wandering winds. Another respite occurs in "Shelly and Steve" where warmth blossoms further in this track. The main theme returns in "Insomnia" and "Mr. Reeves" in an anxious, unsettled guise, along with pizzicato strings and low brass chords in the former and in the latter a dreamy interlude for strings, harp and chimes.

The bold, staccato brass strike forth again in "Kidnapping", along with choppy strings and xylophones, followed by alternating turbulent and rising, tense material. The final two selections, "God Forgive Me" and "End Title", work through the desperate main theme and then briefly surge into the rich major key strings from earlier. This Friedhofer offering is shorter in running time than Harline\'s but no less powerful and this is certainly a winner for fans of both composers and Golden Age film music.