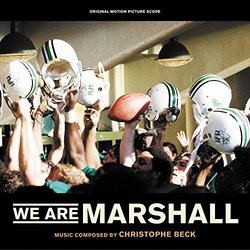 We Are Marshall - Original Score

Review: We Are Marshall

The biggest surprise We Are Marshall had in store for me was how un-Beck-like it sounded. Christophe Beck came to my attention during his successful run as a composer on the Buffy the Vampire Slayer television series. Even though his scores utilized the traditional Western orchestra for the most part, he managed to infuse that music with a distinct voice. This style, which I came to associate with the composer himself, is to my ears wholly absent from We Are Marshall. This has its ups and downs: it is, after all, a testament to Beck\'s versatility, but it also reflects on the studio\'s desire for a "typical sports drama score". While I would be hard pressed to single out this score for its originality, I will however point out how enjoyable it is as a stand-alone listen and how its memorable theme, while a reheated serving, gives the album a strong backbone and a nice sense of continuity.

A boy soprano slowly articulates a melody almost a cappella in "Our Boys\' Plane" before being joined by quiet violins. This is one of the many cues which serve to remind the listener that this particular tale is rooted in tragedy. Indeed, a plane crash resulted in the deaths of almost all of Marshall University\'s football team and this movie tells the story of a new coach, the surviving athletes, and new players trying to revive the Marshall phoenix from its still warm ashes. Beck uses woodwinds and strings in a distinct Americana setting to weave the tragedy in his canvas, a technique which has been done time and again but which still works in his hands due to the strong melodic presence and the performance the conductor gets out of the orchestra. A minute into "Nate\'s Plea", we hear the timpani and the brass roll in like a wave and, although we recognize the easy manipulation, we still fall for it. The piano is used as well, the left hand for mourning, the right for recollection, and an electric guitar is even brought on stage during a couple of cues, including "Dedmon\'s List" and "Why Jack Called", for a bit of rhythm and color.

While the middle section of the album consists of slower pieces in the Americana idiom, the beginning and especially the end of it bring us back into the sports drama portion. We segue out of the mourning by way of "The Young Thundering Herd" which, like "Marshall vs. East Carolina" before, makes use of a dynamically performed drum line to serve as an almost source music backbone to the action cues during the games. The brass and strings are then layered on top in a fashion recalling Goldsmith\'s timeless Rudy score. It is a technique which I had never heard before and my hat is off to Beck for trying something new and quite appropriate. It gives the action music, such as heard in "Marshall vs. Xavier", a distinct style which bumps this album up by half a star. The drum corps slowly mutates back into its usual film music counterpart, however, as we reach the end. By "Second Half", it has unfortunately become a copy-and-paste job from Silvestri\'s "Point of No Return" in Back to the Future, Part III: still very enjoyable but eerily reminiscent of the train set piece.

We Are Marshall concludes its action material with "Touchdown", which begins with the main theme for solo French horn, morphs into a rousing prelude for flourishing trumpets, and concludes with thundering percussion and racing violins and flutes. It is during this fast and constantly reiterated version of the main theme that we truly hear all those other themes that have used this 1-2-4-3 progression before, like the main title theme to Star Trek: Deep Space Nine and Peter Parker\'s theme from the Spider-Man films. It is somewhat disappointing and, for that, the score loses some of its steam, but Beck\'s strong harmonies, his understanding of the language of film scores, and the performance of the orchestra, not to mention the contributions of the drum band to the action sequences, all make for a good listen. Yes, it has been done before, and sometimes better (especially by Goldsmith), but Beck brings in enough gusto and sports patriotism to make We Are Marshall effective and enjoyable.