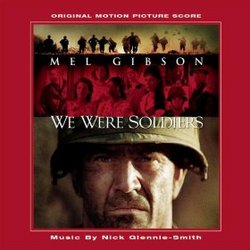 We Were Soldiers - Original Score

Review: We Were Soldiers

In We Were Soldiers, director-writer Randall Wallace takes a stark look at the human side of the war in Vietnam. Told through the eyes of Lt. Colonel Hal Moore (Mel Gibson), the film's story focuses on the first major battle of the war—the ambush in the Ia Drang Valley (where 400 U.S. soldiers were surrounded by 2,000 enemy troops). Re-teaming with Wallace to provide emotional underscore for this film is composer Nick Glennie-Smith.

Glennie-Smith's score for the most part succeeds as the emotional backbone to the film. There is very little "action music" to speak of, but plenty of dramatic suspense. The main heroic theme (an original song called "The Mansions of the Lord") is used throughout the score underpinning the more poignant moments. There are other themes as well, the primary dramatic one evoking memories of Hans Zimmer's scores to The Thin Red Line and Pearl Harbor. That is, they're certainly in the same corner of the room. But at no point did I get bored while listening to this album. "Look Around You" is a lengthy cue that builds up over time, and succeeds in provoking an emotional response. There are also some atmospheric cues that use (what sounds like) Tibetan throat singers ("NVA Base Camp") and it's truly creepy stuff—it will most certainly set you on edge.

I can't stand track titles that give things away, but "Jack's Death" is a wonderful cue that pretty much captures in a short length of time, the somber tone of the entire score. War is hell, and there's nothing pretty or happy about it. "Final Battle" has a bit of a driving rhythm with some almost Middle-Eastern sounding motifs, and while it sounds great, it's just a bit too similar to bits of Black Hawk Down for my liking. Nonetheless, if you get into the music, you really won't care what it sounds like. Also showing up in a few tracks is a rather creepy rendition of "Sgt. MacKenzie" performed by Joseph Kilna MacKenzie. It's hard to describe—you have to hear it to understand. But it's both disturbing and wonderful at the same time.

"End Credits" contains a full choral version of "The Mansions of the Lord," and I swear that if I didn't read the liner notes carefully, I would have sworn that this was some traditional military hymn—it's just that good. This album runs just under an hour in length. It might not sound like the most original score of the year, but Glennie-Smith has done a stand-out job in providing an emotionally satisfying and moving score.