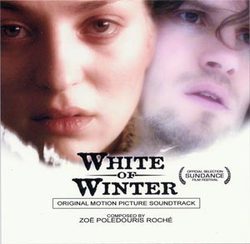 It seems that if one has a parent or sibling active making movies in Hollywood, then the temptation to follow the same path is fairly compelling. And while this most often occurs when the profession is acting, there are examples of the recurring family name in other fields such as directing, production design and composing, the most famous of the latter being the Newman family legacy. The danger of course is that of being compared to one\'s progenitor and their accomplishments, either great or small. The musical career of Zoë Poledouris, the eldest daughter of the late, magnificent film composer Basil Poledouris, has mainly concerned pop/rock music (as fans know she can be seen performing one of her songs at the school dance in Starship Troopers), but she is beginning to delve into the world of film scoring with film such as this, White of Winter. Admittedly, I could not find much information on this 2003 project, except for a less than kind review in Variety, but I give her credit for tackling not only the lead role but also the scoring duties.

The "Opening Titles" of this brief promotional disc of the score is a hypnotic track, starting with an electric guitar being plucked, before it is joined by another guitar, piano, synth strings and oboe and a mid-tempo beat. A descending line on piano is soon taken up by the synth strings as a wordless female vocal intones the 7-note contemplative main melody. A lone and lonely electric guitar also begins the following track, "TV Fantasy/LA Arrival", which also features the wordless female vocal, all in a moody setting before the tone shifts to catchy Middle Eastern percussion and rhythms. The synth strings return in "Looking for Tommy", along with a sympathetic oboe line, while piano takes its place in "Letter to Tommy", a lengthier track than previous but no less saddened. As the film\'s narrative follows a woman desperate search for a child she thinks she once had, it stands to reason that the score would stay focused on feelings of loss and abandonment.

The mood in "Montana Arrival" is somewhat lighter, as hope must seep into the woman\'s fevered search, the synth strings and oboe moving in fluid motion against each other. "Cabin Nightmare" clocks in at six minutes and conveys a stark landscape through drones and steady string lines. Native American percussion and vocals make a surprising appearance near the end, suddenly giving the track the feel of an ancient ritual. The electric guitar and piano combo return in "Hitchhiker to Mountain", which picks up the tempo again with a more resolute frame of mind, resolved to carry on. However, the second half of the track moves again into the more moody string tones, perhaps signifying a pain wound for which there is no balm. The "End Titles" revisit the guitar material from "Hitchhiker to Mountain", adding in shifting high strings atop the descending chords.

I have not heard Ms. Poledouris\'s other efforts at film scoring, but I do hope that she is one day afforded the opportunity to utilize a live orchestra. A low-budget indie film such as White of Winter certainly would have collapsed under the weight of an orchestral score, but I wonder if synth strings and oboe were the right choice, when perhaps the instrumental palette should have remained with those of contemporary music, i.e. electric guitar, vocals, drums and piano, for the "Opening Titles" and "TV Fantasy/LA Arrival" are probably the most satisfying tracks because of this. However, I do think her melodic gifts would merge well with a modest orchestral setting, so perhaps this can be allowed on an upcoming project with a more expansive music budget. When examining the career of an artist who might be following the path of a father, brother, sister or mother, it is important to not expect the same results creatively or critically. I sincerely doubt that Zoë has any desire to score a testosterone-fueled action film directed by John Milius or Paul Verhoeven. However, I find it comforting to know that, as with Jerry Goldsmith\'s son Joel, she felt inspired enough by her father\'s wonderful contributions to film to apply her own talents to the medium and I wish her continued good fortune in it.