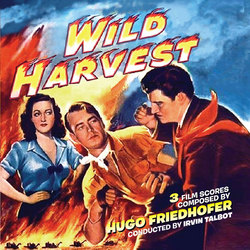 Wild Harvest / No Man of Her Own / Thunder in the East

Intrada announces a trio of Hugo Friedhofer scores from the Paramount vaults in this latest edition of the Intrada Special Collection. In Wild Harvest (1947), set against images of combines threshing amber waves of grain, Friedhofer put his "Americana stamp" on the score with a bright major-mode theme, featuring galloping trumpet and woodwind figures set to a Copland-flavored syncopation in the bass line.

For 1953's Thunder in the East, Friedhofer gave his signature bold harmonies an Oriental flair. The film is set during the taut early days of Indian statehood following the end of British rule in 1947.

In 1950's No Man of Her Own, Barbara Stanwyck poses as the wife of a dead man in order to start a new life and give her newborn bastard son a name. When she goes to live with the deceased's family, she falls in love with her "husband's" brother Bill (John Lund), while her former lover (Lyle Bettger) threatens to expose her secret. Friedhofer's score is built on a trio of strong themes that provide rhythmic and melodic cells throughout the score to increase the tension. Throughout the score, Friedhofer uses vibraphone and harp figures to pull Helen in and out of her indecisive and guilty dreamlike state. For all its mid-century melodramatic trappings, Friedhofer utilizes his customary musical craftsmanship to capture the emotion and drama lurking behind the story's seemingly implausible situations.

No Man of Her Own and what still exists of Thunder in the East have been mastered from 2" transfers of mono 35mm mag originals, and Wild Harvest comes from acetates housed at Brigham Young University. As an added bonus and included among the extras is a revised track from Bride of Vengeance that incorporates a "Foreword" which Intrada was unable to include on its earlier release of that score.