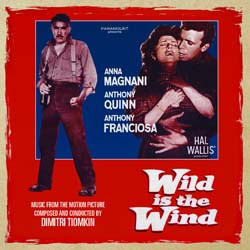 Wild Is the Wind

This 2-CD set, with a running time of almost 108 minutes, gives one of Tiomkin's forgotten gems its well-deserved deluxe treatment, featuring the original film score, first-time ever released, on Disc 1 and the remastered, original Columbia Records LP re-recording on Disc 2.

The film score contains music that was dialed out of the film prior to its release, while the LP re-recording kicks-off with the Johnny Mathis-performed title song. Produced by Lukas Kendall and Didier C. Deutsch, meticulously mastered by Doug Schwartz (Disc 1) and Tim Sturges (Disc 2), and restored by Chris Malone (from 1/4" mono masters), this special release, limited to 2500 units, features exclusive, in-depth liner notes from writer Frank K. DeWald and classic art design by Dan Goldwasser.