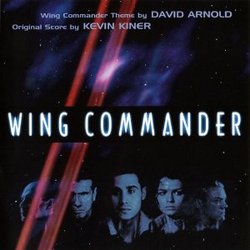 by David A. Koran January 27, 2000
4 / 5 Stars
In high expectations, of what will seem to be the Sci-Fi Summer, 20th Century Fox released their computer game tie-in movie Wing Commander in early March. However, one of the only things the film had going for it was that it was the fact that it was the only movie that weekend that had the new Star Wars prequel trailer attached to it. Another thing it had going for it, ever so slightly, was the score by Kevin Kiner (Leprechaun) with themes by David Arnold. The story, from what I was told, is that Fox, in their infinite wisdom said they wanted David Arnold for the entire score. But, due to their tight purse strings and other commitments that Arnold had pending, they hired Kiner to flesh out the main themes Arnold wrote for the film. I’m sure it was a matter of Kiner being led into the spotting stage and bombarded with a temp track comprised of Arnold’s previous work (notably Stargate and ID4), and the executives saying, we want it to sound like him as cheaply as you can do it. Well, Kiner rose to the occasion, and somewhat beyond. Without sounding extremely derivative, Kiner was able to bring an exciting swashbuckling undercurrent to his music, harking back the earlier days of Flash Gordon serials on the 1930s and 1940s. The main theme is a rather pompous march, but at least it still isn’t molded to typical themes, and like William’s Star Wars theme, it is instantly recognizable &endash and even hum-able.


It’s not quite a space opera, since most of the tracks on the CD refer to battles and other militaristic events (gee, you can see the limitations of a video game-turned-movie already), and dosen’t allow much for exploring outside of the action style of scoring. It’s almost worthwhile to compare it to Bruce Broughton’s Lost In Space from last year, a score with no real underlying theme, but was able to capture the emotional gamut of the characters and their situations rather effectively, which this album, in it’s incantation on CD, doesn’t quite do. I can say however, it’s an exciting score, with touches of flair that David Arnold would have put on the film if he stayed with the project, but Kevin Kiner aptly fills in. There is even a little James Bond-esque music in "Hot Dogs" [Track 11] and "The Gift / Skipper Missile" [Track13] that would have fit perfectly in Tomorrow Never Dies… a rather ominous sign that even non-Sci-Fi films have their place when trying to score a shoot-em-up space brawl. There is nol time in the score, as presented on the CD, where you get a chance to take a relaxing breath, even after the rather appropriately titled "Big Damn Ending" [Track 17].


I’m not exactly sure whether or not I’m upset that I haven’t caught the film in the theater, but I was told it didn’t bring people down off their high of seeing the Star Wars trailer, which I guess can bee seen a s a good sign. I think, for the sake of the movie itself, it could have also gained a few more points with audiences if they would have brought back John Rhys-Davies, Malcolm McDowell, and Mark Hamill to reprise their roles in the original series of video games. Overall, the score and CD are above average and enjoyable (albeit a bit short at 37 minutes), but it’s a shame that the film suffered all around from penny pinching… maybe we’ll see it have a new life with it’s video release.