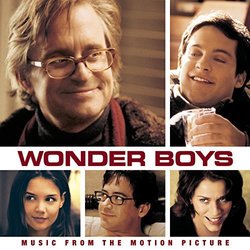 There's something wonderful about the Wonder Boys soundtrack. As hackneyed as that sounds, this soundtrack perfectly blends the "searching for meaning" of the movie with the songs emoting longing and wanting by these established artists. Curtis Hanson has compiled an excellent grouping of songs that reflected the course of events transpiring in his film.

It's been quite some time since a "pop" soundtrack served a legitimate artistic purpose. This is one of those soundtracks. A touching scene, which stays fresh in my mind despite the time elapsed between my screening of Wonder Boys, involves a tired, ruffled Grady Tripp emerging from his Pittsburgh home to Neil Young's "Young Man" playing in the background. Little Willie John's "Need Your Love So Bad" plays, well, the longing in the song's vocals reflected well the emotions playing on-screen simultaneously.

Wonder Boys stands well on its own as a compilation of meaningful rock, folk, and all derivatives thereof. The four helpings of Bob Dylan (with his latest masterpiece "Things have Changed") anchor the music in introspection. I don't want to beat these parallels to death, but the crux of the movie revolves around the transformation of Michael Douglas's irresponsible character. Buffalo Springfield, Tom Rush, Leonard Cohen, Van Morrison, and more all lend despondency to the film's wallowing protagonist. Even the most "upbeat" song, John Lennon's "Watching the Wheels", is muted and rueful, like the dreary Pittsburgh weather, a character onto itself.

So one might ask at this point as to why this doesn't merit a full five stars? To be honest, I'm live on the tail end of Generation X. Though this is absolutely gorgeous, this is not music that I willingly listen to. It's too moody for me and not what I'd go out and buy on my own. As I cannot sincerely call this a "must-have", I can't give this album a full five stars. I will recommend this, however, to those in their twenties who wants to understand their parents. You won't go wrong if you buy this album.