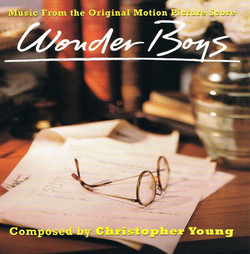 by David A. Koran December 31, 2000
4 / 5 Stars
Okay folks, I have to admit it, I do have a tie to this film, however small and insignificant it may be, but it still does nothing to deny that this movie was one of the best of 2000 and one of composer Christopher Young’s best scores. My connection is that it was filmed at my alma mater, Carnegie Mellon University, and the surrounding environs of Greater Pittsburgh, Pennsylvania, one of the most culturally rich cities in America, a perfect back drop for this oddball little film. With such a great cast and an amazing crew behind the camera, I was astonished at how much it was ignored by the general public upon its initial release. Luckily because of the recent re-release, and the critical acclaim, more folks have gotten to see it, and for the soundtrack fan, after being promised on Varese Sarabande, we finally get a great release of the score from Intrada via a promotional edition. And trust me folks, it was well worth the wait.

Earlier in 2000, Chris had the chance to return, in Hollywood terms, to smaller films with the Kevin Spacey and Danny DeVito starrer, The Big Kahuna. This was an extremely appropriate score for the film, and overall, it was a great piece of music to listen to on the side, especially with its "loungy" leanings. Here, Chris gets the chance to try to localize the feel of his music by giving it a "’burgh" feel without playing up some of the considerable polka leanings the city is known for. Upon listening to the first couple of tracks, and most noticeably by track four, "Greenhouse Woman," one would guess that some of the score was temp-ed with some of Danny Elfman’s work on Midnight Run. To get the bluesy feel, this was an all appropriate direction to go in, but also, because of some of the zany situations Grady Tripp (Michael Douglas) gets himself into, it’s a good starter if you need to branch out for other ideas. The score itself is performed by a small ensemble, consisting of drums, organ, accordion, and guitar, and fits perfectly within the musical bounds that Young has crafted for the film’s direction. By going this way musically, Chris Young has allowed the score to flow easily from a slow blues for the more introspective moments to a more upbeat zydeco/bluegrassy kind of feel for the more "action" oriented sections of the film. It also, amazingly enough, helps add to the darkly comedic sensibility of the film without rubbing your face into it, a rare feat for a number of "name" composers nowadays.

For those who are familiar with Mr. Young’s work over the years, you’ll also enjoy the return of the fun track titles, as they pay homage to other composers as well as play fun on words phrases now and again. Having lived in Pittsburgh for three years while in college and having taken classes (I had one of my most boring classes in the same classroom where the movie opened… it’s also the warmest one during the winter... a connection?) with professors much like Michael Douglas’ character in the film, I think that Chris has hit the proverbial "nail on the head" with the this score. I would hope that he gets the chance to score other films like this, both in scope and style. The music also fits well as something that could underscore a good road trip if it ever made it to a screen, but then again, that’s not only a play on words, but also possibly looking deeper into the source of the possible temp track. The score here has just about everything, and there’s not much I could say to detract from it’s impact both onscreen and on the CD other than the kind of take-away themes you could get from something like suffering through a rehash of Holst’s "Mars" for this year's media favorite, Gladiator. Mr. Young stands on his own for a leader in originality and inventiveness in a cookie-cutter environment such as Hollywood, and should be rightly commended for his work over the past year because so. Grab yourself a copy if you can, you’ll not only do right by this reviewer’s opinion, but you should also be pleased with the results.