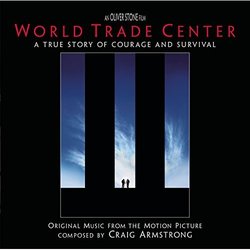 There has been plenty of hostility surrounding one of the most controversial films of this decade, Oliver Stone\'s World Trade Center, and I have not yet decided whether or not I will see the film in the theater. For many, the attack on September 11 is too recent and raw in our minds to relive it again, but if the film lives up to its responsibility to portray the heroic actions of the rescue workers that day, maybe it will do justice to the day. Regardless of one\'s feelings on the film, the score by Craig Armstrong is a sorrowful, yet uplifting piece of music that is highly appropriate for the subject of the film.

I was hoping for a theme that brought out the heroism and patriotic actions of the characters in the way Jerry Goldsmith did for The Last Castle with the cue entitled "September 11, 2001". Armstrong never uses a solo trumpet, but sticks to solo cello and piano with a somber string underscore. French horn and the occasional vocal solos by Catherine O\'Halloran and Susie Stevens Logan add color to the score ("World Trade Center Choral Piece"). Some parts are moved along by light percussion ("Piano Theme") and bring to mind the restrained, majestic style of Zimmer\'s finale cue from The Da Vinci Code, but with a more minimalist approach. While my expectations were different, I find that Armstrong\'s score is right for the concept of the film. There are no blasts of electronics or muddled ambient sounds that some composers might have used for New York City. There are sure to be faster-paced elements to the film, but the score never steps into that territory and maintains a removed feeling, as heard in the trailer for the film.

Despite a quiet, restrained, and slower score, Armstrong has a few main themes that he uses liberally. Cellist Alison Lawrence opens the album with her solo performance of the cello theme, which is followed by Craig Armstrong\'s own piano solo in the second cue. The album clocks in at just under an hour and some of the cues could probably have been cut. The score is summarized and ended with the seven-minute "John Rescues/Resolution" which introduces the only brief trumpet cue in the score. Armstrong closes the album with the string-dominated "Elegy" and the purely piano solo cue "Ethereal Piano Coda". It is clear that Armstrong understood the sensitive nature of this film and did an excellent job in writing a moving score that could support the film without taking too many risks. However, I feel that the classical, minimalist approach is appropriate for the film and still makes a very good memorial score that could probably make a nice concert suite at some point down the road.