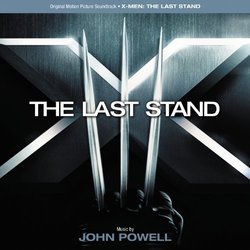 An impressive element of all three X-Men films to date is that, while each utilized the talents of a different composer (Michael Kamen, John Ottman, and now John Powell), the scores are all large-scale orchestral works and maintain a powerful and heroic feel that is perfect for the Marvel universe. While Ottman\'s main theme for X2: X-Men United is my favorite, Powell\'s main theme is certainly very good. One of the most interesting things about this score is that it does not sound like most of Powell\'s repertoire. There are some Chicken Run and other action motifs that are similar, but in general, the style of his composition is in the vein of John Williams\' action/hero work (Superman), especially the brass and rhythms from the main theme. This is somewhat a reflection of Ottman\'s style for X2 as well.

John Powell\'s solo career is best known for his electronic scores, such as the Bourne series, but here he takes an almost fully orchestral approach, but he retains the heavy use of percussive elements that appear in most of his work, to great effect. Whether it is moving light percussion ("Meet Leech, Then Off To The Lake") or heavy, pounding anvils in many of the action cues, this element more than anything else labels it as a Powell score. Powell\'s use of the brass is also extensive and impressive; "Angel\'s Cure" is one great example. "Dark Phoenix\'s Tragedy" is a thrilling cue that has Matrix-like frenetic brass and pulsing low brass and timpani rhythms. Above all this intricate orchestration is a soaring string theme. This cue builds into the sorrowful, restrained "Funeral" that brings a level of emotion to the series that neither Kamen nor Ottman had the opportunity to work with.

Action cues, such as "Fight in the Woods" and "The Battle of the Cure" use Powell\'s main theme in a number of different variations that add depth to the score, where Ottman\'s theme tended to be given a similar treatment during most of its statements. "Examining Jean" opens with one of the most interesting statements of the theme, while "St. Lupus Day" ends with the pounding intro to the main theme, but slows before the theme can begin. We have to wait until a few cues later before the full theme finally comes in with "Attack on Alcatraz". One of the best uses of the theme, however, is not in its triumphant form, but its restrained form in "The Funeral".

What Powell brings to the franchise is a strong choral element, which is used in conjunction with the Dark Phoenix story and is perfect for elevating the character\'s sense of power on the screen. This effect hints at Ottman\'s Jean Gray theme from X2, but Powell takes it to an entirely new level with his own theme for the Phoenix ("Whirlpool of Love"). Sometimes the choir is just a quiet, ominous presence ("Dark Phoenix" and "Jean and Logan") while other cues showcase the full dramatic potential of the chorus ("Rejection Is Never Easy" and especially "Phoenix Rises"). The latter cue is undoubtedly the highlight of the album in the same epic finale style of Return of the King and Revenge of the Sith. A few minutes into the cue, the choir breaks away from the orchestra briefly in an otherworldly performance (the Phoenix, at least in the comics, is an alien being, so this effect is perfect) and elevates this cue to one of the best of Powell\'s career, especially because it is a sound that is new for him.

The final cue, "The Last Stand", begins with a quiet version of the main theme, then moves into a more upbeat statement before eventually moving into the powerful main title version of the theme. While I enjoyed the heroic sound both Kamen and Ottman brought to the X-Men franchise, Powell captured the epic and apocalyptic setting of the final installment in this X-Men trilogy. Less subtle than Ottman\'s X2, I felt a stronger connection with this score due to the variations on the main theme, the layered brass cues, and especially, the impressive choir pieces. Musically, I find this the best of the X-Men trilogy, though not by much, and I commend the producers on their surprising choice of Powell as the composer.