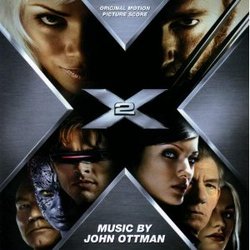 X-Men 2 (or X2 to credit its "hip" form) has undoubtedly been looked upon as one of the most highly anticipated films of 2003. With the sequel to the blockbuster hit of summer 2000 seeing gifted composer John Ottman reunited with director Bryan Singer, in what has always been a highly regarded partnership thus far spanning four films, the score itself has been just as hotly anticipated amongst X-Men and Ottman fans alike.

The sequel picks up almost precisely where its predecessor left off. What the film manages so impressively is to build even further upon characters introduced first time round, as well as bringing completely new characters into the fray. Singer's skilful direction alongside John Ottman's talent as a film editor save X-Men 2 from being a structural mess on screen, but the tasks set upon Ottman as composer were gargantuan, yet he delivers… In fact, he often delivers in spades.

The CD release sees various cues from the film's score presented in a non-chronological order. Depending on one's point of view, this is either a bad thing or simply something not worth worrying over, and this reviewer falls firmly into the latter category. It's difficult too for any keen lover of sequence to re-arrange the CDs sixteen tracks into film order, but the CD begins nicely with the "Suite from X2," a cue which in actual fact accompanies the greater half of the film's end titles. I remain unsure if it was a good idea to actually place the suite as the first track. It surely contains the most blatant and bombastic renditions of Ottman's X-Men theme that you will hear throughout the entire score, but given he took to playing down the theme (more on that in a moment), hearing it in such a grand form at the very start may perhaps leave a longing in the listener who craves further use of such a dramatic motif.

In many ways it should actually be considered a smart decision on the part of the composer to have never let the theme outstay its welcome and be overplayed throughout the score every time one of our heroes were to have walked into a room. It's often customary for a sequel to a blockbuster movie to completely overload the film with as much as humanly possible now that the "establishing nonsense" is out of the way. Musically, and as a movie in general, X-Men 2 smartly understands how far is too far and never dares attempt to throw so many dozen things into the pot at any one time. Again it's a fine example of the partnership Ottman and Singer have, with the music of X2; things may often certainly take their time but rarely miss their mark in setting the mood.

The X2 CD rates itself at an incredibly healthy length, clocking in at just over an hour and containing a good bulk of the film's most memorable, moving and thrilling cues. There are some notable moment's from the film's score missing from the CD of course, as is to be expected, and it is of particular shame for the release not to have included a delightfully beautiful piece of music that scored the movie's final scene.

A surprise, and a delightful one at that, was the discovery of how truly charming many of the moments in the score are. The film's main titles remain another cue left out from the CD release, and whilst essentially a glorified rendition of the main theme, it was a cue so whimsical and elegant in its opening that it firmly set the tone for what Ottman and director Bryan Singer were really trying to go for with the music.

The middle section of the album certainly plays host to the strongest cues on the disc. A single highlight of the album would be hard to pick, though may ultimately fall down to a straight fight between "Mansion Attack" and "Magneto's Old Tricks". The former, being the longest cue on the CD at around seven and a half minutes, is a glorious musical concoction of real danger and excitement. It's a thrilling piece of music, and if you've dedicated any time and money into your music system at home, the cue really lets the excellent mixing of the score and mastering of the CD shine. "Magneto's Old Tricks" ushers in almost the same sense of menace, but differs vastly in its execution. On screen, the events underscored by this cue are nothing short of ingenious in what is frankly a delightfully evil scene. Some of X2's better choir contributions are to be heard here (although some suitably haunting choir work is to be found in "I'm In").

X2 is, with little doubt, John Ottman's biggest score to date. The size of the orchestra is immense and its scale registers with the listener both in the movie and here on the CD too. Whilst in some ways the album may perhaps leave X-Men fanatics and general superhero score lovers somewhat disappointed in the underplaying of the main theme, there is little doubt that the majority will see the score for what it truly is: a wonderfully satisfying score to an equally satisfying movie.