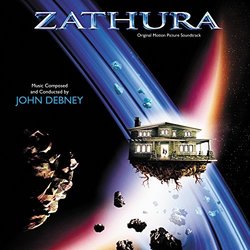 John Debney\'s prolific career has taken many shapes and spanned many genres, from the comedic bounce of Elf to the world music of The Passion of The Christ. One of his most popular styles, that of action/adventure is unfortunately rare. Scores from the mid-1990\'s such as Cutthroat Island and the Emmy award-winning "seaQuest DSV" (and more recently The Scorpion King) showcase some of the more powerful tools in Debney\'s orchestrational arsenal. Fortunately, Jon Favreau\'s new family space adventure, Zathura, gave Debney another go at this style, and again, he hits a home run.

Zathura opens with a powerful main title that has many stylistic similarities to "seaQuest" and introduces his main theme, which returns to the swashbuckling brass feel of Cutthroat Island. Backed by the choir, the orchestra races through the cue with amazing energy right up to the last few notes that build to a bombastic close. Debney uses the theme often and in numerous contexts, such as the wonder-filled "Finding the Game" and the furious, dramatic statement in "Robot\'s Revenge". The main player in the score is the brass, which get to play everything from pounding suspense cues to rousing anthems. The choir also has a strong presence.

While Zathura has its similarities to previous Debney masterpieces, the he did a good job at working the same energy into a slightly new sound. Zathura does not take place on a pirate ship or a submarine, so Debney created a more "outer-space" feeling for it, with Lydian modes. This is heard in "Too Close to the Sun" where the brass and chorus combined take on an otherworldly feel, like parts of Revell\'s Riddick scores or Howard\'s Treasure Planet. Zathura is a strong entry into both science fiction scores and Debney\'s action repertoire. It is wonderful to hear him return to this style and we can only hope another such project comes along soon.