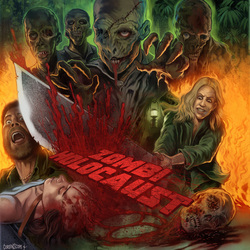 At Death Waltz Recording Company we're proud to feature the music of some of the weirdest and most insane movies around, and few come crazier than Marino Girolami's Zombi Holocaust. Scoring this truly depraved opus is famed Italian composer Nico Fidenco, who finds the perfect balance between jazz-funk, oppressive electronics and soft-core vocals to give the soundtrack what it needs.

Fidenco goes everywhere and anywhere for this score, with thumping bass that wouldn't sound out of place at a rave and the best jazz-flute this side of Jethro Tull. Synthesiser lines drift through the score like a fog, ranging from melodic new wave to dissonant and foreboding, while haunting female vocals inject the music with a pseudo-porno feel. And of course, there's the traditional tribal percussion, as well as a healthy dose of church organ—Fidenco isn't afraid of going anywhere and as a result you have a truly unique and absolutely mental example of a zombie/cannibal film.

180gm double vinyl housed inside a 425gsm jacket with booklet. The definitive version of this Italian splatter classic spread over 2 LPs and including 13 previously unheard cues.