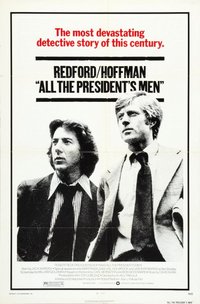 All the President's Men

Review: All the President's Men (Blu-ray)

You can't think of President Richard Nixon without thinking of the Watergate scandal and you can't think of Watergate without two names immediately coming to mind: Bob Woodward and Carl Bernstein. These two enterprising Washington Post reporters were the ones who started digging into what seemed like a rather straightforward burglary and ended up sparking the chain of events that took down a presidency. Their journey of discovery was chronicled in their 1974 book All the President's Men, which caught the eye of actor/producer Robert Redford. William Goldman penned the adaptation, and the resulting film was less about Watergate and more about the two reporters and how they connected the dots.

Woodward (Robert Redford) is a young journalist, who is assigned by Washington Post editor Ben Bradlee (Jason Robards) to cover a break-in at the Democratic National Committee headquarters at the Watergate office complex. In the courthouse, Woodward learns that the five men arrested in the burglary had surveillance equipment and have ties to the CIA, as well as E. Howard Hunt (a former CIA operative) and Charles Colson, President Nixon's special counsel. With the story gaining a little more traction, Bradlee assigns reporter Carl Bernstein (Dustin Hoffman) to work with Woodward in digging deeper. With the help of Woodward's clandestine anonymous source known only as "Deep Throat" (Hal Holbrook), the two reporters start to make astonishing connections and revelations, going so far as to connect the burglary to Nixon's Committee to Re-elect the President and even his White House Chief of Staff, H.R. Haldeman.

The risks that Woodward and Bernstein took, from putting the reputation of the newspaper on the line to even possibly putting their lives in jeopardy, were extraordinary and unfold in All the President's Men with the tension of a modern-day thriller, but instead of bullets, words are used. It's a gripping political tale, brought to life through the very capable hands of director Alan J. Pakula. Recreating the vast Washington Post offices in a soundstage at Warner Bros. was an impressive feat and cinematographer Gordon Willis's inventive and extensive use of the split diopter lens is memorable. David Shire's score, featuring a solo French horn, gives a strong sense of import, as well as tension, where necessary to keep the talk-heavy drama unfolding at a good pace. It's a compelling and engrossing film with solid performances and easily one of the best films of the 1970s.

All the President's Men was released twice on DVD—first in 1997, then again as a "Collector's Edition" in 2006. The supplements for that edition were carried over to the 2011 Digibook Blu-ray release and now that's been expanded again for a new 40th Anniversary 2-disc Blu-ray release. The first disc of this new release is identical to the 2011 release, but without the 40-page book.

Transferred in 2011, All the President's Men looks like a typical 1970s film—grainy and somewhat drab film to look at—but that's the point. Cinematographer Gordon Willis made sure to light the film in a way that contrasted the flat brightness of the newsrooms with the dark shadows of the nighttime garage sequences and those are replicated pretty well on the Blu-ray. The HD image seems a little murky and darks are crushed, but not in a way that seems at odds with the intentions of the filmmakers. I'll note that Willis' use of split-diopter lenses in many sequences still stand out as an excellent and compelling contribution to the tension and flow of the film.

The audio in All the President's Men is presented in DTS-HD Master Audio 2.0 English and it actually sounds rather punchy for a film with little to no action. It's a very 'centered' sound field, but dynamic range is solid, dialogue clear, and David Shire's score never intrudes too much.

This new 2-disc release of All the President's Men contains the same supplements from the 2011 Digibook Blu-ray release, which themselves were carried over from the 2006 DVD release, as well as a new inclusion of a second Blu-ray with a new documentary. The commentary track is a solo one by Robert Redford and it's a decent but not great commentary. He does provide some insight into the making of the project and his love of the material is evident, but he does leave some rather gaping holes in the commentary when he appears to just be watching the film. Other than that, it's a relatively good supplement.

"Telling the Truth About Lies: The Making of All the President's Men" (SD, 28.5-min) is the original 2006 documentary looking back at the challenges of getting the film made. Interviews with the cast (Robert Redford, Dustin Hoffman, Jane Alexander), crew (cinematographer Gordon Willis, screenwriter William Goldman), as well as some of the actual people portrayed in the film (Woodward, Bernstein, Bradlee), are interspersed with archival and behind-the-scenes footage to give a well-rounded look at the making of the film. It might not be the most in-depth look at a film, but it covers most of the bases (nothing about David Shire's score) and is an interesting and enlightening piece. "Woodward and Bernstein: Lighting the Fire" (SD, 18-min) looks at the impact that Woodward and Bernstein's investigative reporting had on the field of journalism, and features comments not only from Woodward and Bernstein, but also other journalists who are working in Washington today, discussing the challenges they face. I'll also note that the nearly endless use of John Williams' score to JFK in the background is a bit distracting and overdone.

Next up is "Out of the Shadows: The Man Who Was Deep Throat" (SD, 16.5-minutes) is a look at the mystery behind the identity of "Deep Throat," who was later revealed to be Mark Felt, former FBI Associate Director. Interviews with Woodward and Bernstein, screenwriter Goldman and others, as well as archival photos and footage, pulls back the curtain on this once elusive character. Finally "Pressure and the Press: The Making of All the President's Men" (SD, 10-min) is a vintage featurette done at the time of the film's release. Not just standard EPK fare, this supplement features behind-the-scenes footage and the facts that inspired the movie, as well as comments by director Pakula, actors Redford and Hoffman, and reporters Woodward and Bernstein, as well as editor Bradlee.

"5/27/1976 Dinah! With Jason Robards" (SD, 7-minutes) is an excerpt from the television talk show "Dinah!" hosted by singer/actress Dinah Shore, in which actor Jason Robards appeared as a guest and they talk about the film and Watergate. Finally, the last supplement on Disc 1 is the theatrical trailer (SD, 3-min).

The second disc in this new 40th Anniversary edition contains only one feature and it's a big one. All the President's Men Revisited (HD, 88-minutes) is a new documentary that aired on the Discovery Channel in the spring of 2013. It is less about a look at the making of the film and more about the whole history of Watergate, the role that Woodward and Bernstein had in unearthing it, ultimately bringing down the Nixon presidency. New interviews with Woodward, Bernstein, Bradlee, Redford and Hoffman are included, as well as some of the key players in the scandal like John Dean, Egil "Bud" Krogh, Fred Thompson, Liz Holtzman and Alexander Butterfield and even former Nixon speechwriter Ben Stein. We also get thoughts by more current political commentators like Rachel Maddow, Jon Stewart, and Joe Scarborough. It's an excellent documentary that goes much further and deeper than the film does in showing us what happened and how it all went down, and is a great and worthwhile extra.

Woodward and Bernstein were two journalists who opened up Pandora's box and set in motion a series of events that brought down a presidency. They set the bar for investigative journalism and for forty years have been held up as examples for young journalists to aspire to. Similarly, All the President's Men is an excellent film that showed Hollywood how to make a thrilling and gripping film without any explosions or action scenes and showed the public how a bustling newsroom really functioned. If you already own the Digibook release that came out two years ago, you might have second thoughts about double-dipping for the Discovery Channel documentary (though it's quite a good supplement)! And if you don't have this one yet, you now have no excuse not to pick it up.