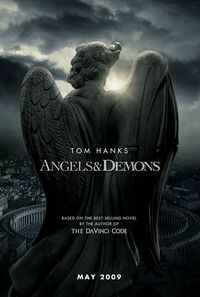 Author Dan Brown’s scholarly protagonist Robert Langdon (Tom Hanks) returns in Angels & Demons. Taking place some time after the events in The Da Vinci Code (although the novel took place prior), we find Langdon summoned by the Vatican when a conspiracy has been uncovered to destroy Vatican City. Someone has stolen anti-matter from a particle accelerator facility in Switzerland, and with the Pope recently deceased, the four “preferiti” (preferred favorites) have been kidnapped. Seems that the Illuminati - the underground secret society - has set their revenge in motion. They announce that they will kill one of the four cardinals each hour until midnight, when they will destroy Vatican City with the anti-matter. And so, the race is on for Langdon to scour the Vatican Archives to find the right clues that will lead them through Rome to each Cardinal - and ultimately the anti-matter - before the city is destroyed.

Joining Langdon on his journey is CERN scientist Vittoria Vetra (Ayelet Zurer), who has the ability to replace the batteries on the anit-matter canister, preventing it from detonating. Camerlengo Patrick McKenna (Ewan McGregor) is trying to help where he can, but everyone seems to be caught in the middle of a larger conspiracy at work, and it is never clear who is good or bad. From the head of the Swiss Guard (Stellan Skarsgĺrd) to the elector of the conclave, Cardinal Strauss (Armin Mueller-Stahl), to Inspector Ernesto Olivetti (Pierfrancesco Favino), everyone seems suspicious.

Like The Da Vinci Code, the film was directed by Ron Howard, and unlike the previous one, this one has a better pace to it. There’s a ticking clock element, so that keeps things moving briskly. The problem is, it’s very superficial, and still somewhat predictable. I enjoyed seeing the mystery unfold, in particular Langdon’s explanations about the history of the Illuminati and the Vatican, but feel that the clues were better done in The Da Vinci Code.

Written by Akiva Goldsman and David Koepp, the dialogue is certainly leagues ahead of Dan Brown’s novel, but still maintains a level of simplicity to it. Suggestion for the future: simply repeating things that are said doesn’t make them any less ludicrous. The music, by Hans Zimmer, is enjoyably tense and religious, with lots of choir and percussion, and there are a few nice nods to the themes he wrote for The Da Vinci Code. There’s also a little bit of Suspiria (and The Ring) in there, but it’s still an enjoyable album to listen to.

Angels & Demons isn’t a truly compelling film, and while it’s engaging and well paced, it just doesn’t hold the excitement as much as something like National Treasure. It’s shorter than The Da Vinci Code, and while the mystery is not very controversial, there are some ludicrous moments that drag down this otherwise entertaining piece of fiction.