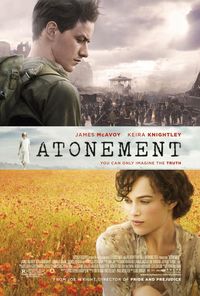 In Atonement, Robbie (James McAvoy) is the son of the housekeeper for the upper class Tallis family, in the Surry Hills area of England, and he has made a big mistake. After the lewd letter he jokingly wrote to daughter Cecilia Tallis (Keira Knightly) is mistakenly handed over instead of the formal one he intended, young Briony (Saoirse Ronan) reads it, and is shocked at what she reads. Her impression that Robbie might be a pervert is not helped when she later catches him with Cecilia in the library study. Believing her unrequited "crush" is a deviant, she fingers him as the guilty party (knowing it wasn't really him) when her cousin is found raped in the bushes - forever changing all of their lives.

Based on the acclaimed novel by Ian McEwan, Atonement shows us how a singular event affects multiple lives. We follow Robby through his experience (after 3 years in prison) as a British soldier in occupied France during World War II at the Dunkirk evacuation, as he tries to return to Cecilia, who has been working as a nurse and waiting for him. None of them have been on speaking terms with Briony, who is also working as a nurse and trying to atone for her actions by writing a novel about what she did.

The movie is very well done, with solid pacing, great cinematography and three dimensional characters. Though their romantic encounter is brief, the connection between Cecilia and Robbie is strong enough to be believable that they would hold out for each other all those years. Similarly, the guilt that Briony feels is palpable, and young Saoirse Ronan does a good job playing the role of the 13-year old. Some people might feel that the ending is a bit of a "jolt (some would even say it's too similar to Titanic, but they'd be wrong). Directed by Joe Wright (Pride and Prejudice), there is a certain airy quality about the pre-war sequences, with the lavish estates and beautiful magic-hour lighting. During the Dunkirk sequence, the typical "World War II desaturated" tone is adopted, but there's an excellent tracking shot that takes us through the evacuation site in one take, and is definitely noteworthy.

The music score by Dario Marianelli is excellent, and his use of a typewriter as a rhythmic device might seem like a nod to Michael Kamen's Brazil, but actually works as a subconscious message that the movie we're watching is actually a story being told by Briony, who is writing it as her novel. I can see this one getting an Oscar nomination. In fact, I can see Atonement getting quite a few nominations, as it's a very well done film throughout, and the story of guilt, love and attempt at redemption makes it well worth your time to see.