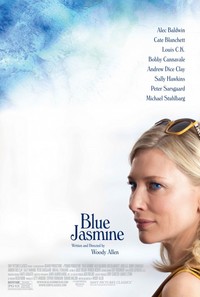 Wood Allen has been a roll these past few summers. Midnight in Paris was one of the best movies of 2011, and last year's To Rome With Love, while uneven, had several laugh out loud moments. On this basis alone I wanted to see Blue Jasmine, expecting some more quirky Woody Allen comedic charm.

Unfortunately, when it comes to threes, the third time is not a charm, instead illustrating that three's a crowd. The problem is more than just that Cate Blanchett as Jasmine is unlikable—she is also irredeemable. You don't want to root for her, for good or bad, and you will find yourself wishing that all the other characters in the movie just kick her out of their lives so it will all be over with and we can all leave the theater.

Stand up comedians Andrew Dice Clay and Luis C.K. play substantial roles and, acting-wise, they work. In fact, most of the performances are good, though bit actor Max Casella steals the only scene he appears in. His performance is reminiscent of the late Bruno Kirby (When Harry Met Sally...), and I hope he gets more opportunities to display his comedic talent. But one stand out performance in one good scene does not a movie make. Skip Blue Jasmine.

The movie's framing mechanism, basically taking place in San Francisco with many flashbacks to New York locations, is uneven. Sometimes it is unclear whether we are in the present in San Francisco or have jumped back in time again.

If I had to name a theme, I would say it is the pathetic nature of evasion. Had the story focused on the destructive nature of evasion—and included some contrast—perhaps it could have worked. But one can only take so much of living in a pathetic person's world, and Blue Jasmine is injected with lethal overdose of the pathetic.

This movie was screened at Arclight Cinemas in Hollywood (full ticket price paid).