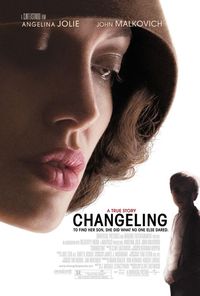 Clint Eastwood\'s film Changeling tells the true story about a single mother, Christine Collins (Angelina Jolie) whose 9-year old son Walter goes missing in 1928. The Los Angeles police don\'t seem to be too concerned, waiting 24 hours before putting out a standard missing\'s person notice. Suffering from bad PR, the LAPD feel they would be best served if a break in the case would surface. A few months later, Christine is informed that her son has been found, and arrangements are made to return him to her. However, as soon as he comes off the train, Christine doesn\'t recognize him, even though Captain J.J. Jones (Jeffrey Donovan), who leads the LAPD\'s Juvenile Division, insists that he is indeed \"Walter Collins\", and suggests that Christine take him home on a \"trial basis\".

As more evidence emerges that \"Walter\" isn\'t who he claims he is, Christine confronts the police, who insist that she must be mistaken. With the help of Reverend Gustav Briegleb (John Malkovich), she manages to get publicity regarding her concerns, but Jones wages a counter-offensive, insisting that she is an unfit mother - and has her committed to the psychopathic ward of the LA County Hospital. When evidence of a possible serial killer shows up in Riverside County, with some possible ties to Walter, it seems that Christine\'s allegations might have some truth to them. Now she\'s on the hunt for the truth of what happened to her son, and seeking justice against the police for their corruption and incompetence.

Directed by Clint Eastwood and written by J. Michael Straczynski, Changeling is a very straightforward story that is effective and engaging. There isn\'t much nuance in how the story unfolds - it\'s very much a linear presentation of the narrative - but it\'s done in a wholly sympathetic manner that helps you feel the pain and frustration that Christine goes through in dealing with the police department. It runs a little long, but in all, it\'s an interesting and well laid out story. Donovan\'s performance as the unrepentant bureaucratic police captain is quite good (he makes you feel frustrated), and Jolie does a very good job as well. Additional research online helps fill in some of the gaps of the case portrayed on the screen, and the ambiguity of what really happed to Walter Collins might make it a somewhat unsatisfying viewing experience for some - but I found it to be enjoyable.

The music, by Eastwood, is simple and effective, and the visual effects and simple shooting style help easily convince the viewer that they are looking at Los Angeles in the 1930s. As a film that explores the impact of police corruption on the public, as well as a woman\'s unrelenting search for her missing son, Changeling is well worth checking out - as well as Eastwood\'s other film this holiday season, Gran Torino.