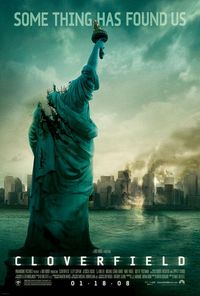 Godzilla meets The Blair Witch Project with a splash of "Felicity" might be a reasonable way to describe the J.J. Abrams produced monster movie Cloverfield. Presented as "found footage", the movie shows a monster attack on Manhattan as seen through the lens of five friends. Rob (Michael Stahl-David) is leaving for Japan for a new job, so his friends throw him a surprise farewell party. Hud (T.J. Miller) is handed the video camera, and ends up spending most of the party hitting on Marlena (Lizzy Caplan) who wants nothing to do with him. When Rob\'s best friend Beth (Odette Yustman) shows up with a date, things get tense; it turns out that Rob and Beth hooked up a few weeks previously.... and the day-after events were on the very tape that Hud is recording the party. After a confrontation, Beth leaves with her date, and Rob feels dejected. But then the monster attacks the city, and things go from bad to worse. After reaching Beth on her cell and hearing her to be injured, Rob is now on a mission to work his way north through the city to rescue her. But the monster is also headed north, and as Rob and his friends work their way through the city, they encounter the military, the monster, and more.

Directed by Matt Reeves ("Felicity"), Cloverfield plays off as more of a drama than a monster movie, but it\'s done in a cinema verite style that allows for some surprisingly honest moments. When Rob calls his mom to relay some bad news to her, it\'s a rather convincing performance by Stahl-David, one that makes you feel like you shouldn\'t be watching this intimate and painful exchange between mother and son. Hud, who starts out as a cocky womanizer who is just trying to use the duties of videotaping the party to hit on Marlena, evolves into someone who realizes he has been given the responsibility of documenting the events that unfold, because it might be the only record of what happened to them - a responsibility he takes very seriously. There are certainly some moments in the film that seem a bit far fetched, but for the most part, Cloverfield holds up as a movie about friends and relationships.

As a monster movie, it succeeds in spades. Taking a hint from Jaws, we never really see the monster for most of the film. We only see glimpses, and because the creature is so large, we almost never see it in its entirety. A glimpse here and there gives us enough of a taste of how horrific this thing is, like some Lovecraftian nightmare come to ravage New York City. We never really find out where it came from, or what it is, since the film is literally just the footage that Hud shot. By having taped over the happy "day after" of Rob and Beth\'s hook-up, we\'re given an opportunity for video "glitches" to throw us back into that happy day, usually at some rather intense moments. It\'s a great cinematic device that gives the audience a bit of relief from the intensity of the situation, but also gives us an additional glimpse into the relationships between the characters.

The visual effects are mostly seamless. The crew did an excellent job shooting this movie; it was surprising to see so many people credited in the end titles, since you have to wonder where the lights were set up, the boom operator, grips, etc. In fact, there are even a few moments where you can see the cameraman in a reflection of a window - and it appears just to be Hud holding a camcorder. The main drawback to this approach, though, is that the film suffers from an overdose of "shaky cam". It\'s not as bad as the last two Bourne films, but I sat near the back row, and it still started to affect me a bit. The sound design is phenomenal, and though it\'s only January, this could be an easy contender for the Best Sound Editing award. (Of course, that such amazing sound could come from a hand-held camera is a stretch.)

There is no music in the film. No score at all. This makes it more realistic as "found footage", and honestly it never felt like it was missing. Lucky for us, though, the end credits features a track called "Roar!" composed by J.J. Abrams collaborator Michael Giacchino. This track is a direct homage to the Japanese monster movies that clearly inspired Cloverfield, and comes off as an "Ennio Morricone meets Akira Ifukube" track. It\'s an excellent piece of music, and contains all the themes for the film that we never heard. A big monster theme, a love theme, and more, with female sopranos adding to the "epic" feeling.

Cloverfield is short, running about 85 minutes long, and it feels like it\'s missing a third act. But as far as "found footage" films go, this one is very well done. If you can get through the first 20 minutes (which is all about the party and characters), then you\'ll be able to enjoy the ride. Just sit in the back row, and hold on to your popcorn!