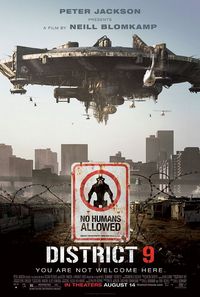 I love seeing movies that I don’t know much about in advance of, since it makes it a fresher and more surprising experience. Beyond the premise, I didn’t know much about District 9, but I found myself fascinated and engrossed in the concept and the film.

20 years ago, aliens arrived at Earth. Their mothership settled over Johannesburg, South Africa, and just sat there. Eventually humans got peeved and so they broke into the ship, and found the ship to be filled with malnourished and leaderless alien refugees. They were settled down on the ground into a government camp known as District 9, but after twenty years of overcrowding, D9 turned into a slum. Nigerian warlords started running the black market, and so a private firm, Multinational United (MNU), was brought in to handle security.

Now the aliens are considered a lower class (the aliens are derogatorily referred to in the film as “prawns”), humans are tired of them, and so the powers-that-be decided to relocate the population of 2-million “prawns” to a new tent facility (”District 10″) 240km away from the city. MNU field operative Wikus van der Merwe (Sharlto Copley) is put in charge of the operation to evict the prawns. But during the operation, he finds a mysterious alien cylinder, and a dark liquid is sprayed in his face. Soon he’s feeling ill, and apparently his genes are mutating. Since the alien weapons can only be activated by someone with alien DNA, MNU decides that Wikus is more valuable than anything else on the planet. He escapes, however, and goes to the one place he can hide: District 9. There, Wikus deals with a rather intelligent prawn named “Christopher Johnson” who has a plan to help Wikus stop the mutation – but will they succeed before MNU finds him?

District 9 is the first film by commercials/music video director Neill Blomkamp, and he did a great job. Shot in a documentary-style for the most part, the film immediately takes on a sense of realism due to the exceptional visual effects, hand-held camera, and unfamiliar actors. Within 10 minutes of the film starting, I accepted the aliens as “real” and was able to just enjoy the story without feeling distracted by the visual effects. Sure there are some plot holes, and a few things take a bit of a leap of faith, but with the subtext of South African apartheid, a multi-layered storyline, and compassionate characters (including some completely virtual ones), District 9 was a surprising and quite refreshing film.

It’s not without some problems though – the pacing is a bit uneven, and the jumps between “documentary” and “narrative” filmmaking is a bit awkward and unintended. The climax – while exciting – suffers from an overuse of shaky-cam, and while I overall enjoyed the African-infused score by Clinton Shorter, there were a few parts that relied a bit too heavily on the temp score, which was clearly The Dark Knight. The visual effects were knock-out, and unlike Transformers: Revenge of the Fallen, there was never a “ooh look at me!” moment. The best visual effects are the ones you don’t notice, and as mentioned above, within the first few minutes of the film, it was easy to accept the effects and just enjoy the movie as it played out.

District 9 is not a perfect film, but for the feature film debut by a promising director, it’s one hell of a first entry. After seeing the film, I can say with confidence that Neill Blomkamp should not only be given whatever project he wants, but I will also be first in line to see it.