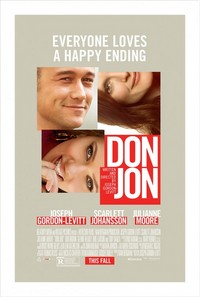 Actor Joseph Gordon-Levitt makes his debut as a writer and director with Don Jon. On the surface, the movie appears to be a superficial comedy about sex and, perhaps, just an excuse for him to make out with Scarlett Johansson on the silver screen. But, surprisingly, there is actually substance behind it all.

If you're turned off by this presentation of today's overly sexuality youth, don't flip the channel just yet. Because behind it all is a young man who is truly seeking a connection, for which pornography serves as a substitute. He doesn't even know how to attain that kind of connection, save for a trip to his laptop computer.

When he is unable to do so successfully, she has his full attention and in turn learns that sex is more about connecting with another human being than it is about any particular position or specific sex acts (although, of course, you can't have one without the other).

The final act of love doesn't totally work and leaves the audience wanting a more authentic connection than we get. None-the-less, the message rings true and works especially well as targeted to today's youth. But for Don Jon, it is an important step and we can root for his transformation as a man.

The film has a feel of a clean Judd Apatow movie. It is filled with comedy and a strong, heart-felt message, sans the overly grotesque moments that Apatow often subjects us to. Tony Danza as Don's father works well in several blunt and hilarious scenes.

Gordon-Levitt shows promise in the director's chair and has a good sense of character and story. The film is definitely worth watching for that reason alone, so long as you find the subject matter palatable.