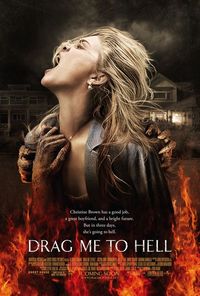 Drag Me to Hell

Review: Drag Me to Hell

After the critical trouncing that was Spider-Man 3 (it was a box office success admittedly), director Sam Raimi returns to his horror roots with Drag Me to Hell. This film is over-the-top, campy, relies on cheap thrills, and is never dull. Translation: I loved it. It\'s a welcome return to the genre that made Raimi a cult director, and it has everything in it that I wanted to see.

Loan officer Christine Brown (Alison Lohman) really wants the Assistant Manager position at the bank, but her boss Mr. Jacks (David Paymer) wants her to show how she can make tough decisions. Unfortunately, that means declining a third mortgage extension to the infirm Mrs. Ganush (Lorna Raver), who - after feeling shamed in public - attacks her in the parking garage and puts a curse on Christine.

Shaken from the attack, Christine is comforted by her psychology professor boyfriend Clay (Justin Long), she starts to see visions of the Gypsy woman everywhere, and to regain her sanity, decides to get her fortune told by psychic Rham Jas (Dileep Rao). Unfortunately, he informs her that she has indeed been cursed - and in three days, the \"Lamia\" will take her soul to hell, for eternal damnation. Determined not to let that happen, Christine does anything she can to prevent being dragged to hell.

Raimi fills the film with lots of winks and nods to his previous Evil Dead films. From the Oldsmobile Delta Royale\'s appearance, to the trademarked whip-zooms and dutch angles, Raimi fans will be delighted by the presentation. No stranger to liquids spewing from people\'s mouths, Raimi pushes Loman through the gauntlet, making her suffer through all manner of vile blood, goo, mud, and even embalming fluid. It is PG-13, so it\'s not as violent as one would expect from Raimi, but there are a few sequences that push the bounds of the rating. Make-up effects are solid, and the CGI is less so, but there are enough cheap and obvious scares that work well enough to make the audience jump in their seats at least a few times.

The acting is hardly noteworthy - lots of scenes suffer from cheesy dialog - but the story is simple in premise and crisp in execution. Lorna Raver is a delight to watch and dominates every scene she is in. Christopher Young\'s intentionally over-the-top score is a total blast, with a recurring eastern European violin motif that will linger long after the film ends.

Drag Me to Hell is hardly a masterpiece of cinema, but it is leagues ahead of the bloated and painful Spider-Man 3, and shows that Raimi can still deliver a fun cinematic ride. I can\'t wait to see it again!