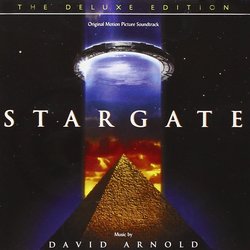 Performed by
The Sinfonia of London

The mid-90\'s was quite a transition period for film composers. (But what period isn\'t, in some way or another?) At the time, many important composers would emerge, such as John Ottman, John Powell, and Marco Beltrami. In the fall of 1994, Stargate was a sleeper hit, helping jumpstart the careers of Roland Emmerich, Dean Devlin and a literally brand new composer named David Arnold.

I barely remember the movie, but oh boy, do I remember when I first heard the music. The power of the "Stargate Overture", the romantic grandness of it just swept me up. Not since James Horner\'s Wrath of Khan score did a newcomer make such a stunning impression - you just knew he wanted to wow you. Arnold quickly launched into the Hollywood A-list and within three years he became the current James Bond series composer with Tomorrow Never Dies.

As is common in an Arnold score, this album comes out of the gate strong and slowly loses energy in the mid-section, due to a decent, but not spectacular, bad guy theme and filler tracks. But, the album recovers with a great series of solid action cues ("Quartz Shipment" through "Kasuf Returns") and an exhilarating finale ("Going Home"). This is a very common pattern and I feel part of that is because he\'s a very structural composer and he patterns much off of previous composers.

Now a lot of people have called this a big John Williams homage (myself included). The golden years of John Williams had just wrapped up (some would say between \'91 and \'93 depending who you talk to). We didn\'t know this at the time, but there was some unconscious desire to fill that void and this score did very well. But Arnold sets the record straight in the liner notes to this new release. "I don\'t think he\'s (John Williams) more of an influence than Maurice Jarre or Max Steiner or Korngold."

Arnold\'s got a great point: we easily lump references together into anything that was made from 1975 on. This score is equally a homage to the swashbuckler romantic scores of the 30\'s/40\'s and biblical/historical epics of the 50\'s/60\'s, with a bit of 70\'s/80\'s sci-fi/adventure blockbusters. The Jarre influences are strongest in the Laurence of Arabia inspired title theme and the various ethnic tracks ("King of the Slaves", "Caravan to Nagada"). His Korngold and Steiner comes out for the intense action ("Surrender" and "Mastadge Drag"). The uniquely Williams elements we hear come out in the foreboding magical early tracks ("The Stargate Opens", "Entering the Stargate") and Ra\'s theme ("Ra, The Sun God"," Myth, Faith, Belief"). But this is academic. Arnold has always been good at quoting older composers (no one is better at doing John Barry). What makes his pastiche still unique is the ability to capture the vitality of these older styles. They feel lush and full again.

We\'ve had a Stargate soundtrack already from the time of the original release of the movie. This "Deluxe Edition" adds only about 10 minutes of new music, but it is the exactly 10 minutes I had been missing out on, including "Closing Titles (Intro)". If you\'re a real fan of this score, it\'s a perfectly acceptable double dip. While Arnold would quickly write more ambitious and textured scores afterwards, there\'s nothing like the first time. And this album still holds up a winner.