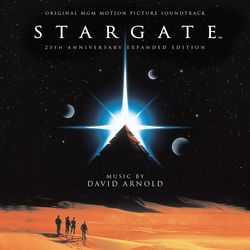 La-La Land Records and MGM proudly present Stargate: 25th Anniversary Expanded Limited Edition, a 2-CD remastered, deluxe presentation of renowned composer David Arnold's original motion picture score to the 1994 landmark sci-fi feature film Stargate, starring Kurt Russell and James Spader, and directed by Roland Emmerich. One of the great adventure scores of the 1990's, Stargate ushered David Arnold into the universe of Hollywood's most sought after composers and kicked off a prolific career that continues to this day. Positively overflowing with action, drama and wonder, Arnold's score is an orchestral masterwork every bit as epic as the film's multi-dimensional interstellar plot – and this release unleashes its musical power. Produced by the composer and Neil S. Bulk, and mastered by Doug Schwartz, this stellar-sounding release is expanded across a 2-CD assembly, showcasing the score presentation and additional music tracks for a running time of 109 minutes. The exclusive, in-depth liner notes are by writer Tim Greiving and the sharp art design is by Dan Goldwasser. This is a limited CD edition of 3000 units.