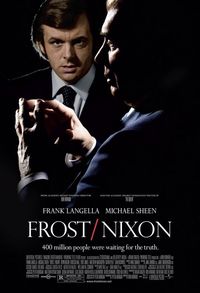 Based on the Tony-nominated play by Peter Morgan, Frost/Nixon is a dramatic telling about the post-Watergate events that led to talk show host David Frost securing an exclusive interview with disgraced former President Richard Nixon - and the intellectual chess game that ensued during the course of the interviews.

When Nixon (Frank Langella) resigns from office, David Frost (Michael Sheen) crunches the numbers, and thinks that getting an interview with the former president would be a major ratings coup.  Unfortunately, no one else really seems to think so, and so Frost works his connections and puts his own money on the line to get a deal signed with Nixon - who just wants to regain enough credibility to go back to the east coast from his west coast \"exile\".  Soon they have enough money to get started, but some people on the research team want to use the interviews as a way of getting Nixon to admit his culpability in Watergate - something he had never confessed to.  As the two men face off and Nixon continually wipes the floor with Frost (dominating the conversation and taking the lead), Frost realizes he\'s going to need some larger ammunition if he\'s going to get something truly newsworthy.

Directed by Ron Howard, and with a screenplay written by Peter Morgan himself, Frost/Nixon is a compelling drama with excellent performances.  The problem with any real-event film is that we tend to know the outcome.  Still, to watch Frost match wits against Nixon is both a tense and entertaining experience.  Langella - who won the Tony Award for his stage performance - is excellent as Nixon. It took about 15-20 minutes to accept him in the role, but only because of my comfortability with Anthony Hopkins in Nixon, and the comic portrayal on \"Futurama\".  (Think of it this way - seeing someone play Ted Kennedy would be a little hard to adjust to because one is likely to instinctively think of Mayor Quimby from \"The Simpsons\"!)

The film is set up with plenty of flashbacks and real archival material interspersed, maybe to give it a somewhat documentary sensibility (or, perhaps, more like that of an Oliver Stone film?).  The cinematography by Salvadore Totino feels very natural, with deep blacks.  Hans Zimmer\'s score is understated yet provides the requisite amount of tension to the scenes, in a Thomas Newman-y kind of way.

Frost/Nixon is well worth your time to check out.  It\'s interesting to see how Frost managed to get Nixon in a corner, and with some nice supporting roles by Kevin Bacon, Sam Rockwell and Oliver Platt, the movie is a fine showcase of raw acting talent.