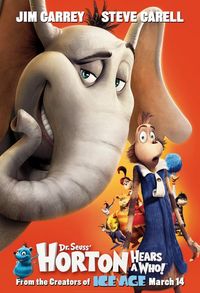 Horton Hears a Who

Hollywood and Dr. Seuss have had a rather interesting - and at times strained - relationship.  While many of his classic books were successfully adapted for traditional animation (How the Grinch Stole Christmas, The Cat in the Hat, The Lorax, Horton Hears a Who and others), recent live action adaptations fell pretty flat (How the Grinch Stole Christmas, The Cat in the Hat).  So when the folks at Blue Sky Studios, who brought us the Ice Age films, decided to tackle a Seuss project, there were certainly some concerns about how they would go about doing it.  The result, I\'m pleased to say, was satisfactorily achieved.  Based on the classic Seuss book released in 1954, Horton Hears a Who involves a care-free, happy elephant named Horton (Jim Carrey), who discovers a talking speck of dust on a clover.  Horton develops a relationship with the voice, which it turns out is the Mayor of Who-ville (Steve Carell), who can only hear Horton through a pipe in his house.  As the fellow jungle animals ridicule Horton (for they don\'t have as good hearing as him, and cannot hear the Mayor), the Mayor himself is likewise ridiculed by his fellow citizens, because they don\'t believe that there is some giant elephant out in the sky.  To keep Who-ville safe, Horton takes it upon himself to bring the speck (on the clover) to the top of Mt. Nool, which is the safest place in the jungle, believing that "a person\'s a person, no matter how small".  Unfortunately for Horton, the rather strict Sour Kangaroo (Carol Burnett) is convinced that Horton\'s behavior is a bad role model, and with the help of a black-bottomed eagle named Vlad (Will Arnett), she seeks to destroy the clover so that Horton doesn\'t put ridiculous ideas in the heads of the children.

Horton Hears a Who has a nice message of equality, and the artists at Blue Sky Studios did a wonderful job keeping the Seuss style intact, but realized in a fully 3D way. Carrey is a bit over-the-top, but still amusing as the likeable Horton, and Carell is good as the slightly zany and overeager Mayor.  Directed by Jimmy Hayward and Steve Martino, the movie has a brisk pace, with only a few pop-culture references, and for the most part sticks to the Seuss story, including a subplot involving the Mayor\'s son JoJo, who doesn\'t want to disappoint his father.

The film is hitting home video on December 9th, in a bunch of different flavors: a single disc DVD, a two-disc special edition DVD, a gift-set two-disc release, and a 2-disc Blu-ray release.  We were sent an advance of the two disc special edition, but all of the data was crammed onto a single disc, single layered - so it\'s impossible to talk about the quality of the video.  The colors and images seemed good, but compression was absolutely terrible. I can imagine that it looks great on DVD, and the Blu-ray is undoubtedly the best way to see the film.  The audio sounds pretty good though, with a nice immersive sound mix and John Powell\'s great music filling the room.

The extras start out with an Ice Age short film that is accessible from the main menu.  "Surviving Sid" (8-minutes) is a mildly entertaining short with Sid the Sloth (John Leguizamo) trying to run a summer camp. No idea why they didn\'t just make a Horton short film.  A feature-length commentary track from directors Jimmy Hayward and Steve Martino gives the listener a lot of background on the making of the film. Story and character development are discussed, as well as some of the technical advances that the studio made to bring the Seussian world to life.  It\'s an informative and well done track.  Three sections of "Deleted Scenes" are included, with an introduction by the directors, and commentary on all of it: "Storyboard Versions" (9 scenes, 14-minutes), "Rough Animation Versions" (2 scenes, 2.5-minutes), and "Almost-Final Versions" (2 scenes, 1-minute).  Three sections of "Animation Screen Tests" are included: "Horton" (3-minutes), "Mayor" (4-minutes), and "Whos" (30-seconds).

"Bringing the Characters to Life" (5.5-minutes) is a quick featurette on the vocal performances and animators that all worked together to bring the different aspects of the characters to life.  "That\'s One Big Elephant: Animating Horton" (8-minutes) looks at the technical challenges with modeling and animating an elephant that acts as crazily as Jim Carrey, but still retains the qualities and look that Seuss envisioned.  "Meet Katie" (4-minutes) is a look at one of the most bizarre and humorous side-characters that steals the show.  "Bringing Seuss to Screen" (8-minutes) looks at the production design and how the Seussian style was adapted into the 3D realm.

"The Elephant in the Room: Jim Carrey" (5-minutes) looks at the vocal work that Carrey did for the film, and how some of his own improvised moments resulted in the filmmakers making changes to the film. "A Person is a Person: A Universal Message" (3.5-minutes) is a quick feel-good piece about the message in the Seuss story. "Our Speck: Where Do We Fit In?" (4-minutes) looks at the idea of Earth being just a small speck in a larger universe, geared towards kids. "Elephant Fun: The Facts" (5.5-minutes) takes a look at real elephants and their behavioral styles.  Finally "We Are Here!" is an interactive game where you have to recreate the musical patterns played on the screen with different instruments.  No trailers for Horton Hears a Who appears on the disc, nor does anything about John Powell\'s score.

Horton Hears a Who is an entertaining film, whose message about equality is nicely integrated into an expanded narrative that is well animated, sounds and (probably) looks great. A nice heaping of extras will appeal to those who are interested in a bit of the behind-the-scenes of the animation process, and Horton Hears a Who is worth a look.