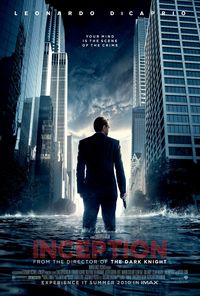 In Inception, the idea of corporate espionage is taken to the next level. Dominic Cobb (Leonardo DiCaprio) is an "extractor" - someone who, through shared dreaming technology developed by the military, steals sensitive information from his targets.  Along with his point man Arthur (Joseph Gordon-Levitt), Cobb was trying to extract information from Japanese businessman Saito (Ken Watanabe), but things went wrong when the subconscious representation of his dead wife Mal (Marion Cotillard) showed up and ruined the plan.  It turns out that Saito was auditioning Cobb and his team to make them an offer - to try "inception", the concept of planting an idea into someone's head and making them think it was their own idea.

Cobb - who has been a fugitive from justice in the United States in suspicion of Mal's death - has been unable to see his two kids, and Saito's offer to get him cleared of all charges in exchange for helping him is too attractive to pass up.  Saito's intent is to have Robert Fisher (Cillian Murphy), the son of Saito's terminally-ill corporate rival, dissolve his father's empire.  But they can't just plant the idea in Fisher's head in one dream; they need to give the suggestion in a more metaphorical state, many dream-layers deep, to allow him to give himself the idea.

To help Cobb out, he recruits Eames (Tom Hardy), a forger who can change his appearance inside dreams, Ariadne (Ellen Page), a student architect to help design the dream, and Yusuf (Dileep Rao), a chemist who has come up with a special formula to keep people sedated during the shared dream-state.  In a sedative state, to wake up from a dream, you need to either be killed in the dream (and pain is very, very real), or woken up by a "kick" - that feeling of falling.  The problem with going three levels deep - as they need to do to cause "inception" in Fisher -  is that time stretches exponentially through each layer, and eventually knowing the difference between reality and the dream might be nearly impossible.  Compounding the situation is Cobb's guilt about Mol's death, which seems to be manifesting in the form of Mol invading the dreams.  Ariadne seems to be the only one to recognize the precarious situation, and as the team attempts "inception", they all run the very real risk of losing themselves within the dream.

Directed by Christopher Nola, Inception was one of the most original movies I've seen in a long time.  One you get past the unexplained concept of dream-sharing, the story becomes very involved and engaging.  DiCaprio's performance, as a man who is torn up inside about the death of his wife and loss of his children, while trying to keep it together and lead a team through a dangerous mission, is quite solid.  The visual aspects of the film are great, with stunning dreamscapes situated in reality, but having something just a little 'off' about them.  The entire climax - intercutting between three different dreamscapes - is a tremendous achievement, aided in no small way by Hans Zimmer's excellent score.  There is a lot of subtlety to the film, and it holds up quite well on multiple viewings.

Recently the film was released on DVD and Blu-ray, and I have to say, I was incredibly disappointed with the visual presentation of Inception on DVD.  Colors are not very saturated (they were subdued in the original theatrical presentation), but it's in the darkness where the details suffer. Nothing is truly bright in this transfer; even the snowscapes look grey and lifeless. Compression on the DVD feels too high; the average bitrate seemed to be about 4 MB/sec - well below what they could have done, even for a movie that runs 2.5 hours.  Instead of utilizing the maximum amount of disc space for the video bitrate (something easily achievable given the lack of extras), Inception feels squeezed, compressed, and suffers from a soft image with blocky artifacting.  It's almost as though the folks at Warner Brothers were trying to intentionally give the DVD release a sub-standard encoding, in order to push the higher quality Blu-ray.  Faring a bit better than the visual aspect, the audio for Inception is presented in English, French and Spanish Dolby Digital 5.1.  It's a pretty good track with an excellent mix.  Dialogue is clean and understandable, even among the most frenetic and powerful action sequences.  The surrounds and subwoofer will get quite a workout, and Hans Zimmer's score gets prominent attention.

The supplements on the DVD release of Inception are clearly geared - like the sub-par video quality - to push people towards the Blu-ray release.  Where the Blu-ray release contains 45-minutes of "Extraction Mode Focus Points", only four of these featurettes - totaling 12 minutes - have been included on the DVD release.  "The Inception of Inception" (SD 16x9, 3-minutes) is a brief look with director/writer Christopher Nolan and producer Emma Thomas about how Nolan conceived of the film's premise.  "The Japanese Castle: The Dream is Collapsing " (SD 16x9, 3.5-minutes) explores the set design for Saito's dream world, and how they made it look like it was destroyed. "Constructing Paradoxical Architecture" (SD 16x9, 2.5-minutes) looks at how they created the illusion of the Penrose steps, which are infinitely going up in a loop in a very clever optical illusion. "The Freight Train" (SD 16x9, 3-minutes) looks at how they created a physical freight train out of a truck, and drove it through traffic in downtown Los Angeles.

That's all there is on the DVD.  None of the other extras, from the remaining "Focus Points", the 40-minute 5.1 preview of Hans Zimmer's score, the 45-minute long documentary on dreams, the 15-minute motion comic prequel, the conceptual art gallery, as well as all the trailers and television spots are all missing from the DVD release.  But they're all on the Blu-ray release.  Combined with the mediocre visual presentation of the film, if that's not a hint from the studio that they want you to make the move to Blu-ray, I don't know what is.  Inception is a great film, and it has a solid Blu-ray release.  Too bad the DVD release is like a bad dream.