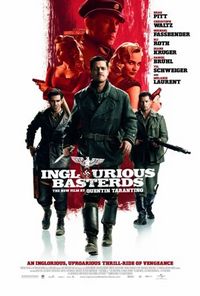 World War II movies tend to be either one of two things: incredibly depressing, or incredibly inspiring. It can be a sensitive subject to tackle, depending on the approach of the filmmaker, and with Inglourious Basterds, Quentin Tarantino takes us on a somewhat cathartic journey right down the middle. Starting out in Sergio Leone fashion with a title card that says "Once Upon a Time.... in Nazi-occupied France", Tarantino immediately sets the tone for the majority of the film - it's a talkie. A prolonged scene where Nazi Colonel Hans Landa (brilliantly performed by Christoph Waltz) psychologically breaks a farmer hiding Jews beneath his floorboards, opens the film and takes its time. After Landa lets one of the Jews escape the massacre of her family, we move to a few years later, in 1944, where 1st Lieutenant Aldo Raine (Brad Pitt) has assembled a crack-team comprised of mainly Jewish soldiers to hunt down Nazis. Not content with merely capturing/killing them, Raine demands their scalps, earning him the nickname "Aldo the Apache".

The teenager (Mélanie Laurent) who escaped Landa three years earlier is now in Paris running a movie cinema, under the name of "Emmanuelle Mimieux". She tries to shy off the advances of Frederick Zoller (Daniel Brühl), a German marksman who is also the subject of a propaganda film. In an effort to impress her, Zoller manages to convince Nazi propaganda minister Joseph Goebbels to hold the premiere of the film at Mimieux's theater. With most of the Nazi high command to be in attendance, Mimieux comes up with a plan to burn the theater down during the premiere in an act of revenge.

But don't be fooled - while there are plenty moments of extreme violence, this is no action film. Instead, this is a Tarantino picture through and through, with excessively long sequences of dialogue, with characters spouting off all manner of trivia (primarily cinema related), creating an air of tension that is only occasionally spattered with humor. It's a WWII revenge fantasy, and while it bears little resemblance to real life (no real mention of the Holocaust), the film is still a satisfying - but long - piece of cinema.

Where Tarantino overextends himself is the dialogue. But while such lengthy scenes might cause one to zone out or lose interest, the fact that a majority of the film is spoken in native languages (German and French, with a little Italian on occasion), and the actors (primarily Waltz) so fascinating to watch makes it more digestible than your typical Tarantino talkies (see Death Proof). As per his usual post-production style, most of the music in Inglourious Basterds is tracked in from other films and sources - Ennio Morricone and Charles Bernstein's music features primarily, but there are some odd modern inclusions, like David Bowie's "Cat People (Putting Out Fire)" and Billy Preston's "Slaughter".

Inglourious Basterds runs about 45 minutes too long, but with an amazing performance by Christoph Waltz - delivered in German, French, English and some Italian - it's definitely worth seeing. Some people might be turned off by the talkativeness of it, but that's par for the course for Tarantino - and with the ultra-violence (some of which is quite gory) scattered through the film, it might be a little uneven, but it was still satisfying.