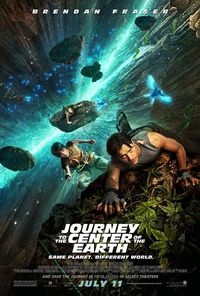 Journey to the Center of the Earth

Review: Journey to the Center of the Earth (3D)

A modern retelling of the classic Jules Verne novel, Journey to the Center of the Earth parallels the original story, but also references it as a basis for the plot. Trevor (Brendan Fraser) is a geologic scientist who is trying to complete his brother Max\'s work. Max vanished on an expedition ten years earlier, and has been presumed dead. When Trevor is saddled with his nephew Sean (Josh Hutcherson) for 10-days, he isn\'t sure what they will do, or how to connect to the troubled teen. But when looking through a box of Max\'s old things, they come across his old copy of Verne\'s Journey to the Center of the Earth complete with notes in the margin written there by Max. Sensing that Max was on to something, Trevor takes Sean with him to Iceland, where they meet up with Hannah (Anita Briem), the daughter of a reclusive scientist that Max had sought out. Hannah is hired to take Trevor and Sean up the slopes of Mt. Snćfellsjökull - much like the story in the novel - and after a cave-in traps them all in a mine, it appears that the book Verne wrote might not have been fiction after all. But can they use the book to save themselves?

Directed by former ILM VFX Supervisor Eric Brevig, Journey to the Center of the Earth is a cute family adventure. It\'s relatively predictable and presented in a very straightforward manner. What makes the film unique is that it was shot in 3D, apparently with the same cameras that James Cameron used on Avatar. (Rumor has it that he was on the set a bit, to see how the cameras worked, etc.) The 3D is pretty cool, but definitely gimmicky. It takes a film that would otherwise be a forgettable summer family movie, and brings it up a notch into the \"something to experience\" category. But because it\'s gimmicky at times (lots of things pointing/falling/flying/hitting the camera), the people who see it in 2D won\'t be able to appreciate it - instead, I imagine it would feel really cheesy. There was one moment that made pretty much everyone in the theater jump, and I can imagine that the impact of that moment would be lessened if it were not in 3D.

As for the story, the characters aren\'t really fleshed out either - Trevor and Sean both are attracted to Hannah, which is a bit creepy since Hanna is old enough to be Sean\'s mother. Sean is upset that he never got to know his dad, and Trevor still hasn\'t come to terms with his brother\'s death either. You can predict who finally connects up with who at the end of the film, but it\'s a bit of a stretch to imagine that after just 48-hours together, any relationship would be a lasting one.

The music by Andrew Lockington is large and bombastic, with strong themes that permeate the film. All in all a fun effort, but there were a few places in the film - mainly towards the beginning - where it felt overspotted and a bit too mickey-mousing. Journey to the Center of the Earth is a big visual effects extravaganza, and while much of the effects are pretty good, there is a low-budget quality to a lot of it, and a lot of green screen shots feel over-composed. It\'s not likely that the film will be as enjoyable in 2D as it was in 3D, so if you want a clean family adventure, that\'s the way I\'d suggest you check it out. It\'s more of a home video film, but without the ability to do 3D at home, it\'s gotta be a theatrical experience.