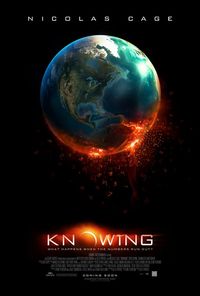 How frustrating is it when you see a film that is really good and well done - and then falls apart during the last third? Such is the case with Knowing, the new sci-fi/thriller from visionary director Alex Proyas. 50 years after it was written and shoved into an elementary school time capsule, MIT astrophysicist John Koestler (Nicholas Cage) comes across a mysterious piece of paper filled with numbers. Sensing a pattern, he discovers that the paper contains the dates and numbers of dead in all major disasters in the past five decades.... but there are more numbers yet to come. He and his son Caleb (Chandler Canterbury) have been mourning the loss of John\'s wife in a deadly fire, and even that incident is listed among the numbers. Believing that he can try to prevent the prophecies from coming true, John tries to get people to listen to him - but to no avail. After a few disasters, he realizes that where the numbers end might signify the very destruction of mankind.

As he seeks out the truth of the numbers, his son is starting to hear "whispering", and mysterious tall blond men start appearing near his son, projecting visions of destruction - hinting that these events are not a coincidence. John looks for the woman who wrote the numbers, but she is dead, and so he finds her daughter Diana (Rose Byrne) in hopes of cracking the final piece of the code.

Knowing sets things up great - the mystery of the numbers, the disasters they foretell, and the emotional journey that John takes is all good. But the payoff is where things fall apart. I don\'t want to ruin the plot for you, but there are a lot of things that seemed a little out of place, and quite a few major plot holes. I guess that the film didn\'t really have anywhere else to go, and the climactic destruction (seen in the trailers) had to foretell something about where the movie would take us. The very ending of the film - while somewhat ambiguous - has more holes than swiss cheese, and left me with a rather unsatisfying feeling. I will commend the writers for the underlying message of faith and belief in something more beyond this world, and the way things in the climax tie into the Bible was a pleasant and unexpected turn.

Marco Beltrami\'s dramatic orchestral and choir filled score helps with the tension and emotion of the story, and the visual effects are pretty good, including two particularly intense (and surprisingly violent) sequences. Let\'s be honest - people want to see things destroyed (on film). Knowing has plenty of that (including Boston going bye-bye, which as a Bostonian was a bit of a treat), and ultimately that is what will sell the film. It will be interesting to see how the film fares with the public; as much as I enjoyed it, the last third drained me of most of my excitement, and I left the theater feeling quite let down.

If anything, I\'d say Knowing is worth a rental, and it would be interesting to see if there is a more substantive director\'s cut that helps fill in a few of the holes... but even if that were to happen, it\'s unlikely that the biggest hole (the finale) would be rectified.