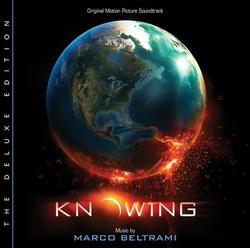 Knowing was a hit when it was released in the spring of 2009, starring Nicolas Cage as an MIT astrophysics professor trying to decipher a prophecy of numbers that eerily predict worldwide disasters. Directed by Alex Proyas, the film features Cage in a race against time with the entire human race at stake.

Reuniting with Proyas from I, Robot was composer Marco Beltrami, who provided Knowing with a powerful score at turns suspenseful, terrifying, pulse-pounding and action-packed. Recorded with a large orchestra in Australia, the score also has poignant emotional moments and a grand scope befitting the film's apocalyptic implications.

Knowing was released by Varčse Sarabande as a single CD at the time of the film. This 2CD Deluxe Edition nearly doubles the playing time, and features new liner notes by Daniel Schweiger incorporating interviews with Beltrami and his co-composers, Buck Sanders and Marcus Trumpp.