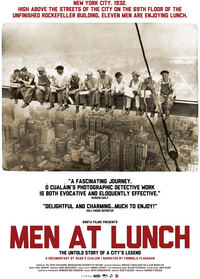 The one-hour fifteen minute documentary Men at Lunch pretty much delivers on its promise: to explore the many facets of the famous 1932 photograph of eleven iron workers eating lunch atop the skyscraper at 30 Rockefeller Center in New York while it was under construction.

Corbis, which bought the photo some years ago and collects its licensing fees, says it is the best selling image in its archive.

The documentary creates some mystery around the photo, enough to maintain a compelling narrative for most of the film, although the last act does drag as it explores who some of the individual 11 men in the photo were.

Perhaps that is because the photo has come to represent a dream and an idea, and exactly who these men were is not the point. This is an angle thoroughly discussed by various experts in the documentary, which works best when setting the context for the photo in terms of the time in history it takes place and what life was like in America in the 1930s.

That the men were immigrants is critical. Millions of people emigrated to the United States at this time in order to build a better life. And build they did. In a time when immigration policy is being debated in this country, this photo is a healthy reminder of the value brought to America by its immigrants.

The film does fail to make any mention of what or who made the building of the skyscraper possible, which is a big omission. Who planned the building? What was it being built in the first place? Who financed it? What made wealth creation process made this building possible? These are questions we do not get answered.

But many other questions are answered, especially about the iron workers themselves. How much were they paid? How dangerous was the job? Who took this photo? Why was it taken? Was it staged or not? Etc. The answers are satisfying and, for anyone who has ever admired the New York skyline, skyscrapers, or America in general, the documentary will give you an even deeper appreciation for this inspiring image.

If you are unable to visit the theater for its theatrical release (it opened in Los Angeles last Friday) then definitely queue this up for home viewing.

This movie was screened at the reviewer's home on a DVD disc provided courtesy of the distributor.