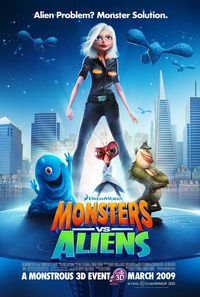 Dreamworks Animation had a bit of a rocky start, with a few hits (Shrek) and misses (Shark Tale). But lately they have been releasing increasingly solid films that appeal both to the young and old alike. Their latest, Monsters vs. Aliens has a rather simple and yet fun 1950s sci-fi premise: Aliens are going to invade Earth, and the only ones who can help save us are the Monsters that the Government has been keeping a secret from the public.

When Susan Murphy (voiced by Reese Witherspoon) is struck by a meteor just before she is about to get married, the "quantonium" mutates her DNA and makes her an enormous 49-foot tall woman. The military quickly capture her, and secret her away to a remote compound. There she meets the other residents. Dr. Cockroach (voiced by Hugh Laurie), is a scientist who was genetically merged with a cockroach. The Missing Link (voiced by Will Arnett) is an out-of-shape fish/ape hybrid who had super strength. Bob (voiced by Seth Rogan) is a gelatinous blue mass with no brain. And finally, Insectosaurus, a 350-foot tall giant grub. Led by General W. R. Monger (voiced Kiefer Sutherland), the team is consigned to a life hidden away from the public. When the evil alien Gallaxhar (voiced by Rainn Wilson) sends a giant robot to San Francisco looking for the "quantonium" that landed there, the President of the United States (voiced by Stephen Colbert) sends in the military - to no avail. Monger suggests using the Monsters to take on the robot, and the team is deployed to take care of the robot, and defeat Gallaxhar\'s plan to take over the world.

Directed by Conrad Vernon and Rob Letterman, Monsters vs. Aliens has a clever blend of humor, action, drama, character depth, and countless nods to classic Sci-Fi films. The comedy is enjoyable, and the action is rather impressive - the Golden Gate Bridge sequence in particular was very exciting and well choreographed. Rogen steals the show as B.O.B., and Witherspoon does an effective job helping the audience feel Susan\'s plight when her life is turned upside down after her abnormal growth occurs.

If you have the choice, Monsters vs. Aliens is definitely one to see in a 3D theater. There aren\'t many "look at me!" moments, but the overall use of depth is quite stunning and immersive. The music by Henry Jackman is energetic and fun, and even includes a few winks-and-nods to some classic John Williams Sci-Fi films.

Monsters vs. Aliens is one of the better movies out this spring, and comes highly recommended. There\'s a nice message about one\'s purpose, and at 94-minutes long, the film balances the introspective moments well with the action and lighter fare.