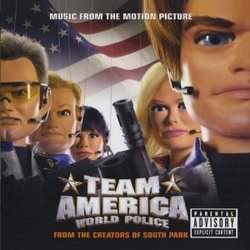 Writer and director Trey Parker commented that he was purposely going for a Bruckheimer feel for Team America: World Police, his puppet satire on modern politics, the war on terror, North Korea, and of course, Hollywood liberals. Parker had originally hired frequent collaborator Marc Shaiman (South Park: Bigger, Longer and Uncut) to write the music for the film. However, at the 11th hour, Shaiman's score was replaced by Harry Gregson-Williams, whose music from past Bruckheimer films had been used in the temp score.

Gregson-Williams began to make a name for himself by writing music on action films such as The Rock, Armageddon, and Enemy of the State. Some of Gregson-Williams' best work has been for animated films such as Chicken Run and Shrek, but for Team America: World Police he had to play the "straight man" to Trey Parker's comedic songs.

Every song on the album pokes fun stylistically at established genres. The album begins with Parker's take on Broadway cliche, with a song called "Everyone Has AIDS" - a delicious jab at Rent (in the film, the musical is called Lease). A patriotic anthem in the vein of "God Bless the USA", "Freedom Isn't Free" reminds us that "freedom costs a buck-o-five". The penultimate theme song, "America, F**k Yeah!", goes over the top with it's Spinal Tap styled heavy metal guitars, and the list that is shouted off will have you on the floor. (Later on in the album, the sad and tender "Bummer Mix" version of this song is equally funny - and features Marc Shaiman's orchestrations.)

"Derka Derk (Terrorist Theme)" is a blatant (and intentional) knock off of the Cantina Band music from Star Wars. It's a toss away track, and doesn't really do anything for the flow. "Only A Woman" is Parker's take on Aerosmith's "I Don't Wanna Miss A Thing" from Armageddon. After that is Kim Jong Ill's "I'm So Ronery". The song by itself is not funny - it's the performance that counts. "The End of an Act" gives Parker an opportunity to completely tear Michael Bay apart.

One of the funnier songs (and sequences) in the film is "Montage". This song explains itself, and if you don't have any flashbacks to the Rocky films, then you have no idea what you're missing. "North Korean Melody" is the horribly derogatory faux-Korean musical number from the film. It's just goofy. Sadly missing from the album is the end credit song all about Alec Baldwin - but I suppose that's what DVDs are for.

The score portion of the album opens with "Team America March", a high-octane fanfare that passes between the horns and trumpets with the rest of the orchestra and beating snares behind. Here, Gregson-Williams introduces a fanfare theme that unfortunately makes few appearances in the other score cues. The end of this track slows down and introduces a love theme that continues into the second track, "Lisa and Gary". Despite the short amount of time he was given for this score, the end product is not as synthesized as Pirates of the Caribbean, though Gregson-Williams does still use his well-known electronics in parts.

Gregson-Williams' album contribution runs less than a half hour in length, but includes quite a bit. "Putting a Jihad on You" and "Kim Jong II" mix electronics with ethnic elements (vocals, woodwinds, acoustic strings, electric cello), as he had done in Spy Game, with some action motifs, ala Armageddon. Interestingly enough, because of the last minute composer switch, the album was rushed out - and nowhere on it does Gregson-Williams' name appear!

Because the album is half comedy, half dramatic action score, it might feel a bit unbalanced. Mixing up the songs and score would have helped balance it out a bit, but overall this is an album that will certainly get a lot repeat play, and it one of the surprise highlights of 2004.