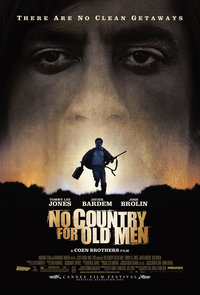 No Country for Old Men

Review: No Country for Old Men

The last Coen Brothers film, The Ladykillers, was a comedy that didn\'t do very well at all. Thankfully, they\'re back with a vengeance in the dramatic thriller adaptation of Cormac McCarthy\'s No Country for Old Men. The film takes place in 1980, and involves the events that occur after Llewelyn Moss (Josh Brolin) stumbles on an apparent drug deal gone bad near the Texas-Mexico border, and discovers $2 million in cash as well as a lot of heroin, dead bodies, and one dying Mexican who wants water. After taking the money and returning home, Moss is overcome by his conscience, and returns to the scene with some water for the man. Finding him dead, he is almost killed himself when gunmen appear. Moss sends his wife on a bus to stay with her mother, and now he\'s on the run with the money, being hunted by a hitman (Javier Bardem) whose method of killing people involves an air-compressor driven cattle gun. As they play a painful and near-deadly game of cat-and-mouse, the drug-bust scene has been discovered and local sheriff Ed Tom Bell (Tommy Lee Jones) begins the investigation to try to figure out what went down, and find Moss.

The film is presented in very typical Coen Brothers fashion: lots of excellent camera work (courtesy of Roger Deakins), lengthy shots that establish tone and setting, with dialogue that gives phenomenal insight into the characters. The actors all deliver solid performances, but without a doubt, Bardem is the best of the bunch, with an understated delivery to his hitman character that will certainly rank as one of the scarier performances since Anthony Hopkins\' Hannibal Lecter (look for an expected Oscar nod in January).

The soundscape is rather interesting, as there is barely any music - just a few tones and strains here and there. This sonic nakedness allows the natural sound of the landscape to take center stage, and truly immerse you in the southern Texas heat. There is music during the end titles, but it\'s not enough to qualify composer Carter Burwell for any serious awards consideration. Though the ending might disappoint many people for its untraditional structure, No Country for Old Men lets the Coen Brothers explore the human condition much like they did in Fargo, and the result is a somewhat violent but excellent film.